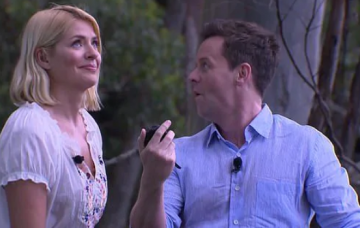 Holly Willoughby was “massively relieved” after hosting her first I’m A Celebrity… Get Me Out Of Here!’ show on Sunday night.

The 37-year-old TV presenter has taken over as co-host of the programme from her pal, Ant McPartlin, after he took time off following his drink-driving conviction earlier this year – and now Holly has admitted she was “overwhelmed” to be co-presenting the show alongside Declan Donnelly after tuning in for “many years”.

Speaking on the spin-off show Extra Camp about her first day on the job, Holly said: “[I was] relieved, like massively.

“It’s just so overwhelming this show, you walk in and you’re here, like you’ve watched this on TV, it’s been part of my life for years and now I’m here.

Dec, 43, confessed that when he showed the This Morning co-host around the famous celebrity campsite, she teared up over how “beautiful” her new Aussie surroundings were.

He said: “It’s really nice for me seeing it through someone else’s eyes as well, going round everything like, ‘Oh my God’.

“The first day we went down and showed Holly the camp and I said, ‘This is where we stand,’ and then I looked round and she wasn’t there.

“She was at the entrance of the camp and just looking up and little tears in her eyes and she said, ‘It’s beautiful!’ ”

Holly added: “It’s so beautiful, there was no one in at that point, there was no chaos of the celebrities, it was just peaceful, it was sort of magical.”

I’m A Celebrity… Get Me Out Of Here returns on Monday night at 9pm on ITV.

What did YOU make of Holly’s debut? Leave us a comment on our Facebook page @EntertainmentDailyFix and let us know what you think.