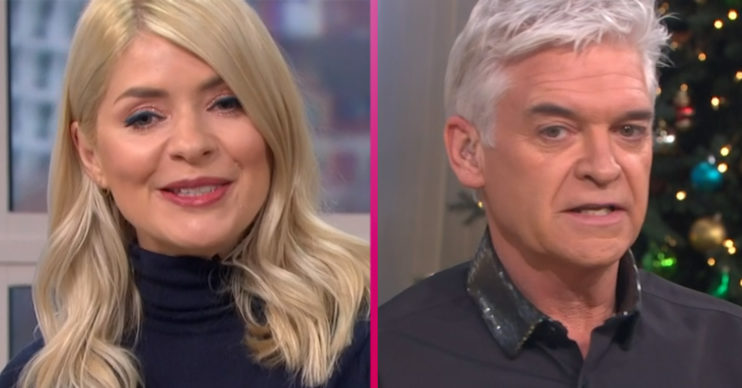 The pair sported glitter and sequins!

Holly Willoughby stunned viewers with her outfit today on This Morning and so did her co-star Phillip Schofield.

What did Holly Willoughby say about her outfit today?

Holly showed off her stunning outfit on This Morning on Thursday.

She even revealed she added glitter to her eye makeup to get in the full festive spirit.

Meanwhile, Phil revealed he decided to spruce up his shirts after feeling “left out” on Wednesday’s programme.

Phil said: “I’ve got matching collars and cuffs,” as he showed off his new sequin collar and cuffs.

Phil admitted: “I felt very left out yesterday because they put a star filter on you and you were shimmering.

“I felt very left out so David O’Brien, down in wardrobe who does all my clothes, worked overnight like a little Christmas elf to sew sparkles onto this.”

The camera crew then put on the star filter and Phil’s shirt shimmered a little bit.

Holly then stood up and showed off her sequin skirt.

Holly said: “Dressed as a bauble,” to which Phil asked: “What am I going to do now?”

I felt very left out yesterday because they put a star filter on you and you were shimmering.

Phil then pointed out: “And even your eyes!” as Holly revealed: “I went for glitter makeup today. I’m enjoying myself.”

Viewers shared their thoughts on the pair’s festive looks on Twitter.

One person said: “Holly Willoughby looks amazing I mean she always does but omg.”

Another wrote: “Love your shirt #thismorning Phil,” followed by a heart-eyed emoji.

A third added: “Matching collar and cuff, who could ask for more.”

What did you think of Holly and Phil’s looks today? Head to our Facebook page @EntertainmentDailyFix and tell us what you think.