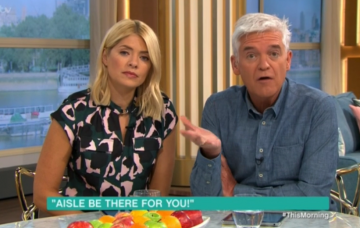 Holly Willoughby on verge of tears after emotional phone-in

Phillip Schofield had to make sure she was okay

Holly Willoughby was overcome with emotion during a phone-in segment inspired by the royal wedding on Wednesday’s This Morning.

The show asked viewers to call or write into the show to share their wedding day stories, and one woman’s experience left Holly fighting back tears.

The discussion was inspired by the recent news that Thomas Markle may not be able to walk his daughter Meghan down the aisle when she marries Prince Harry on Saturday.

One lady called Nicky emailed in to say her little boy, Tyler, walked her down the aisle following the death of her father.

Nicky explained that she wanted her mum to keep her role as mother of the bride, so it “felt right” for Tyler to walk her down the aisle.

While reading out Nicky’s email, Holly welled up.

The email read: “My little boy walked me down the aisle. My dad passed away so couldn’t fulfil the role. I wanted my mum to keep her role as mother of the bride. It just felt right for Tyler to have the honour and be part of mummy and daddy’s special day.”

“Oh my God, it’s going to make me cry!” Holly exclaimed, as she tried to regain her composure by fanning herself with her cue card.

There was a short pause as Holly’s co-presenter Phillip Schofield checked she was okay before moving on with the show.

“I’m alright,” Holly replied. “That one crept up on me there.”

Meanwhile in the segment, Holly and Phil also spoke to a woman called Claire who wanted to ask her mother to walk her down the aisle when she gets married in Las Vegas.

Claire told the hosts that her mother watches the show religiously, but, sadly, today she wasn’t watching.

However, Holly and Phil managed to get hold of Claire’s mum and, of course, she said yes!

They also spoke to a couple of women who revealed their mother walked them down the aisle at their weddings.

It’s been reported that Meghan’s dad Thomas is unlikely to attend his daughter’s wedding to Prince Harry because of his health.

Thomas, 73, said he would be undergoing a heart procedure on Wednesday morning after recently suffering a heart attack, meaning he may not be able to fly to the UK for the nuptials.

It remains uncertain whether Thomas will attend the wedding and it’s been suggested her mother, Doria Ragland, could take on the role.

Who did you choose to walk you down the aisle? Leave us a comment on our Facebook page @EntertainmentDailyFix and let us know what you think!