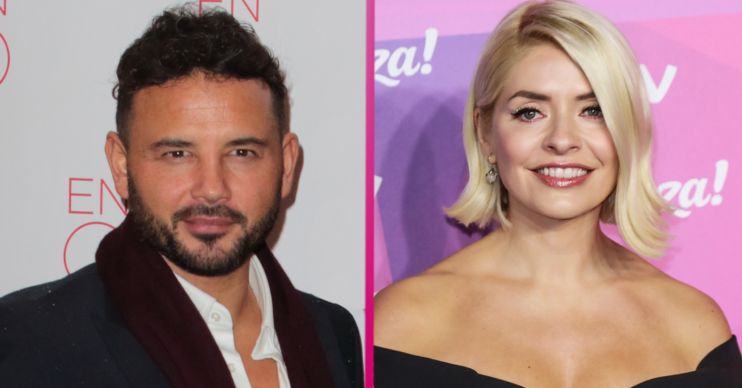 He could do with some good news at the moment

Holly Willoughby may be at home isolating with COVID but there’s some pretty exciting news concerning her new show The Games this morning (March 21).

This Morning host Holly will host the new live series The Games on ITV later this spring.

And now the line-up for the show has been revealed.

Holly Willoughby news: Which celebs are on The Games line-up?

Joining the show is none other than former Coronation Street star Ryan Thomas.

The actor could certainly do with some good news at the moment.

His son with fiancée Lucy Mecklenburgh, adorable Roman, has had a horrific health scare of late.

The parents found the tot blue in his cot recently and now his condition has been diagnosed.

What is wrong with Roman?

Poor Roman has fluid leaking into his lungs and, as a result, won’t be able to drink runny liquids until things improve.

Lucy, who is pregnant with baby number two, held back tears as she issued a health update over the weekend.

“Now, from Monday, when we pick up the thickener, he can’t have any thin fluids for quite a long time. Potentially years.

“So no lollies and ice-creams, no water or juice. Everything has to be a really thick consistency to stop it entering his lungs.”

Who else is on The Games line-up?

In happier news, doting dad Ryan is joining the line-up of the new ITV live series The Games, fronted by Holly Willoughby and Freddie Flintoff.

He’s one of 12 celebrities announced this morning for the show.

The others pulling on their swimsuits and lacing up their trainers are Olivia Attwood, Mel B’s daughter Phoenix Brown, Strictly’s Kevin Clifton and The Wanted’s Max George.

What is the new Holly Willoughby show about?

The Games starts this spring on ITV.

It will see celebrities step out of their comfort zones to be coached, trained and then compete, hoping to be crowned top of the medals table.

Alex Scott joins the live show as a trackside reporter, while Chris Kamara acts as commentator.

The six male and six female competitors will battle it out in the athletics arena, the swimming pool, gymnasium and velodrome.

Read more: Does Alex Scott have a partner? What happened with her Corrie star ex?

Each will put their sporting prowess to the test in events from the 100-meter sprint to diving, racking up points on the medals table.

As well as live coverage of the events, each episode will feature the celebrities’ preparation as they’re taught the sports from scratch by some of the UK’s top coaches.

As the leader board takes shape each night, the series will culminate in an exhilarating final showdown in which one male champion and one female champion will be crowned.