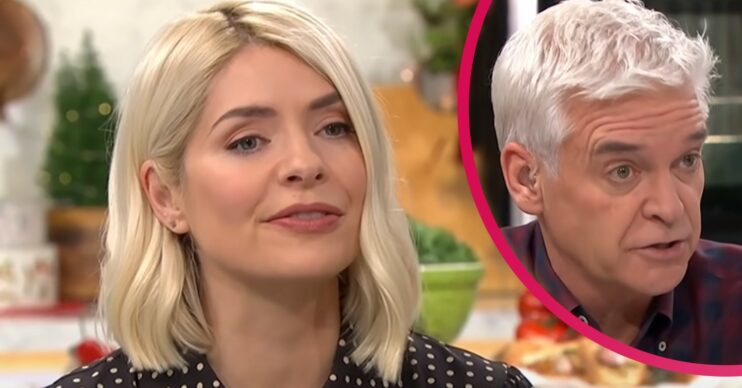 Holly Willoughby misses This Morning again as she battles illness

Holly has missed three days of This Morning

Holly Willoughby is missing This Morning again today as she continues to feel “under the weather”.

The presenter, 40, was replaced on the programme on Tuesday and Wednesday this week as Josie Gibson hosted alongside Phillip Schofield.

On Tuesday, Phil explained that Holly had a “tummy bug”.

Is Holly Willoughby on This Morning today?

However, she’s still not better today (November 18) and she told fans about her illness on Instagram.

Read more: This Morning: Holly Willoughby replaced for a second day as Josie Gibson takes over

Alongside a photo of her cat Bluebell, Holly said: “Good morning…

“My name is Bluebell, sadly Holly won’t be able to come out to play on @thismorning today as she is still under the weather…”

Holly continued: “Seriously what I’ve witnessed over the last 48 hours you wouldn’t want her there…

“I’m sure she’ll be back on Monday… Honestly I’m sick of the sight of her!”

Fans sent their well-wishes to Holly and said they hope she gets better soon.

One person said: “Get well soon Holly, we miss you.”

Another commented: “Sending lots of love and you feel better soon.”

One added: “Aww. Get well soon Holly. We miss you.”

Meanwhile, on Tuesday, This Morning viewers were surprised to see Josie in Holly’s place.

Josie admitted she felt “honoured” to be hosting alongside Phil and said it was “surreal”.

The following day, Josie returned to replace Holly again and admitted she cried after her presenting debut on Tuesday.

She told Phil: “Social media can be a dark place sometimes, but yesterday I was showered with love.

“I had a good cry, I did have a cry for about half an hour after the show.”

Josie added: “It was a really big thing to be sat here with you yesterday.”

Read more: This Morning fans convinced Holly Willoughby is a ‘wildcard’ on I’m A Celebrity

And viewers have been loving Josie. So much so, many want her to be a permanent host!

One said on Twitter: “Everbody wants Josie. Please give her a permanent slot presenting as she is so lovely and natural.”

What do you think of Josie? Leave us a comment on our Facebook page @EntertainmentDailyFix and let us know.