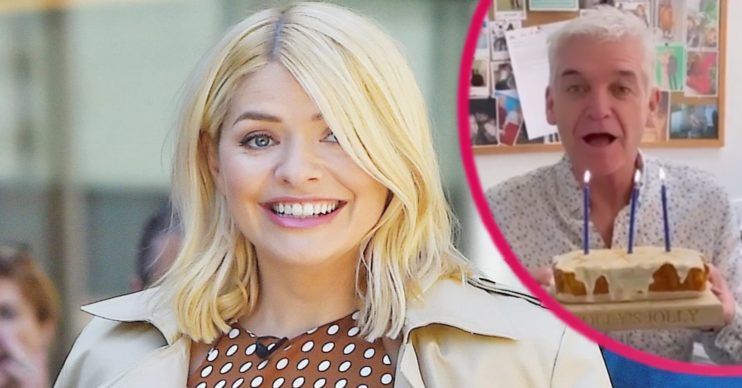 Holly Willoughby ‘s kids have treated Phillip Schofield to an adorable cake on his birthday.

The presenter marked his 59th birthday at This Morning today (April 1), and was treated to a whole host of surprises.

Documenting the day on Instagram, Phillip shared a glimpse into his celebrations at work.

As well as a delicious fry-up for breakfast, Phil was greeted to a swarm balloons in his dressing room.

Furthermore, the host looked delighted after being presented with a homemade sponge cake.

He later revealed the cake was carefully made by Holly’s three children.

Alongside the shot, Phil gushed: “Cake made by Holly’s Harry, Belle and Chester.”

Meanwhile, Holly took to her profile to share a special tribute to her co-host.

She penned: “Happy birthday to this gorgeous human… love you to bits @schofe.

“Forever my partner in laughter.”

Holly also accompanied the post with a three shots of Phil.

How did This Morning fans react?

Fans rushed to comment on the tribute, with one saying: “Happy birthday lovely!! Have a fab day.”

A second shared: “Going to be a good show!”

In addition, a third wrote: “Happy birthday Phil! You have entertained the nation all through the pandemic and deserve the best day ever.”

Meanwhile, in October, Phillip heaped praise on his co-host.

Discussing their friendship in his autobiography, he wrote: “Holly can be a dangerous friend to have.

“In my old school reports some of my teachers would write that I was easily led.

“In my adult life there are very few friends that I trust to lead me into mischief. But Holly is at the top of that group.”

Furthermore, Phil shared: “We’ve enjoyed wonderful and outrageously drunken lunches. When just occasionally we had the time to let our hair down and reflect on life.”

In addition, he credited Holly for helping him come out in February 2020.