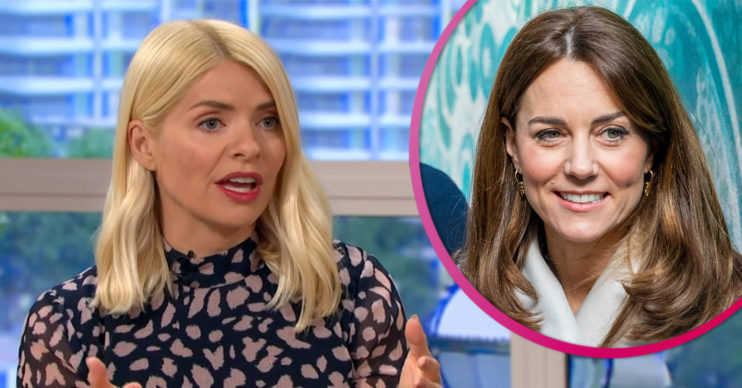 She was trying to deliver important information to viewers

TV’s Holly Willoughby apologised to the Duchess of Cambridge after a blunder on This Morning.

The Duchess has asked the public to share their own pictures to show their lockdown experiences.

Read more: This Morning’s Holly Willoughby brings out her wild side in gorgeous cheetah-print dress

As Holly tried to tell viewers where they could send their pictures in to, she got the website wrong.

Her co-star Phillip Schofield told viewers: “The deadline for photos submissions is actually today and it’s at 6pm.”

Holly continued: “Yes, to upload your photos head to NPG.org.uk forward slash hold…” as she slipped up on her words.

She said: “What did I just say there? I even practised this and I got it wrong! Let’s do it one more time shall we?

However, it was wrong again and Phil jokingly called her out.

He said: “Hold dash still,” to which Holly said: “There you go, we’ll put it on the screen. Read it yourselves it’s quite a complicated one.”

This is my actual job to read stuff and I can’t do it sometimes.

Phil burst into hysterics and covered his face with his hands.

Holly said: “This is my actual job to read stuff and I can’t do it sometimes.

“I didn’t believe there was a final dash between ‘hold still’. Unnecessary I think.”

Phil quipped: “Shall I tell the Duchess of Cambridge or shall you?”

Kate teamed up with the National Portrait Gallery for her photo project named Hold Still.

The exhibition will feature 100 photographs, giving a glimpse into the nation’s experience of lockdown.

Speaking about the project, Kate said: “We’ve all been struck by some of the incredible images we’ve seen.”

In addition, she said: “Some desperately sad images showing the human tragedy of this pandemic.

“Other uplifting pictures showing people coming together to support those more vulnerable.”

Did you submit a photo? Leave us a comment on our Facebook page @EntertainmentDailyFix and let us know.