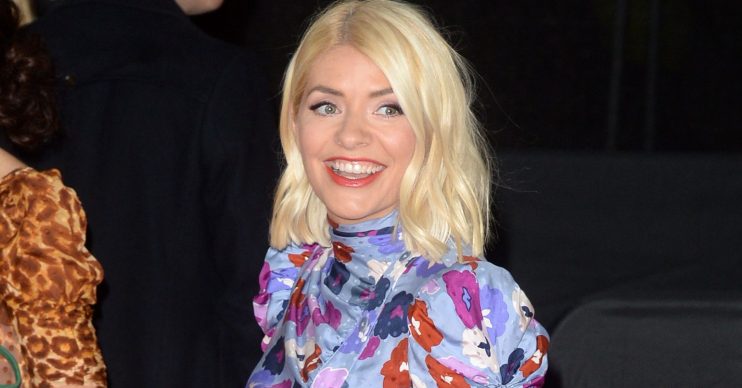 Fans of Holly Willoughby have noticed that the presenter has been taking her daily selfies from a strange angle.

The This Morning presenter takes a post every day before she starts the show, showing her full outfit.

But since her post on March 19, she has been using the same very high angle – and it’s not gone unnoticed by her loyal 6.6 million-strong Instagram following.

Of course, Holly looks amazing from every angle, but people are questioning why on her photos.

One follower replied to one of Holly’s photos saying: “Why do you take these fun pictures from such an angle?”

Another person asked, “Any more angles?” and another replied, “Nope, only one angle.”

A third comment: “Love this lady… please change the angle of the photos for us.”

Morning… everyday brings a new feeling… Wishing our Prime Minister @borisjohnsonuk and his family so much love… please, please, please… stay home and stay safe… ❤️. See you on @thismorning at 10am … Skirt by @sandroparis knitwear by @insidejigsaw ✨

Someone else even had a suggestion for the next day’s photo: “Loving the new camera angle but what say we go crazy and use the left arm tomorrow. Just for the craic.”

Why has Holly started taking her photos from the new angle?

Of course, the reason behind Holly’s new angle is most likely down to the coronavirus social distancing measures that most of us (besides a few exceptions) are adhering to at the moment.

Why do you take these fun pictures from such an angle?

In a bid to slow down the spread of the virus, the government has advised people to stay at least two metres apart.

Another member of the This Morning team usually takes Holly’s pics, in which she shares where she got her outfit from.

But the fact we are keeping away from each other as much as possible, that wouldn’t set a good example to Holly’s huge following.

The high angle will be so that we can see as much of her outfit as possible. A mirror selfie might not get all of her in the photo.

Elsewhere, Holly recently opened up about her weight loss. She said that the secret isn’t really that much of a secret at all – she has stuck to a healthy, balanced diet and regularly exercises. She says one of her favourite ways to exercise is Pilates.

Why does Holly rarely speak about her weight and diet?

Although Holly is regularly asked about her weight-loss secrets, she rarely discusses it.

This is because she is incredibly conscious of sending out the wrong message regarding body image.

“Everybody knows what leads to a healthy lifestyle, but it’s not up to me to give you a blow-by-blow account of what I’ve eaten that day,” she told The Sunday Times magazine.

What do you think of Holly Willoughby’s social distancing techniques? Visit our Facebook Page @EntertainmentDailyFix and let us know what you think of this story.