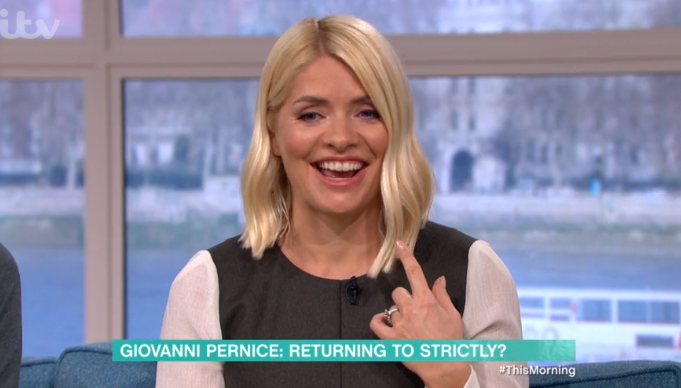 She's a "massive" fan of the show

TV’s Holly Willoughby has dropped a hint she could be up for doing Strictly Come Dancing.

The presenter, 38, is often hosting entertainment shows rather than actually doing them but could we see her take to the dance floor this autumn?

On Wednesday’s This Morning, Holly admitted she “loves” the BBC show and she’s a “massive fan”.

Read more: This Morning viewers asking why Holly Willoughby has come to work dressed as a schoolgirl

Holly asked Strictly pro dancer Giovanni Pernice, who was on today’s show: “Do you ever think, ‘I’d love that celeb to come in, I’d like to dance with that person.’ Do you have a hit list?”

As Phillip Schofield pointed to Holly, she said: “They’re all saying in my ear, ‘are you waiting for him to say your name?’ Yes!”

I know and I love the show – I’m a massive fan.

Giovanni said: “I keep telling you you have to do the show.”

Holly replied: “I know, I know and I love the show. I’m a massive fan,” to which Giovanni said: “You’ll have to do it at some point. You would be the perfect partner.”

The mum-of-three admitted: “I can’t… I don’t know whether you saw me on Spin to Win [a This Morning segment] but my [dancing] skills have gone down hill.”

Phil said: “You don’t listen to John Barrowman, you can dance! I think you’d be great on there.”

Holly told the pair: “Thank you, thank you…” before trying to change the conversation by asking Giovanni: “How’s Ashley [Roberts, his girlfriend]?”

Giovanni said: “I love the change of subject but still, you have to do it!” to which Holly laughed: “Okay.”

Back in 2017, Holly admitted she would love to learn to dance but wouldn’t want to do it on TV.

She told the Daily Star at the time: “I couldn’t do Strictly… oh God no. I’d love to learn to dance but I wouldn’t want to do it on telly.

“Everyone would be watching me do it and that would be horrendous because I’m not very good at dancing.

“I’d probably be as bad as Ed Balls. I’d be more Ed Balls than Abbey Clancy, put it that way.”

Meanwhile, Holly raised questions with her outfit choice for today’s This Morning.

She wore a £390 grey pinafore-style dress with white shirt sleeves by Cefinn but many people compared her to a schoolgirl.

One person said: “Usually like the dresses that Holly wears, she looks great in most things, but this reminds me of my three year old’s school pinafore. I’d consult the stylist team.”

Another wrote: “When I saw this I instantly thought of my six year old’s school uniform.”

A third commented: “I thought you had a school pinafore on.”