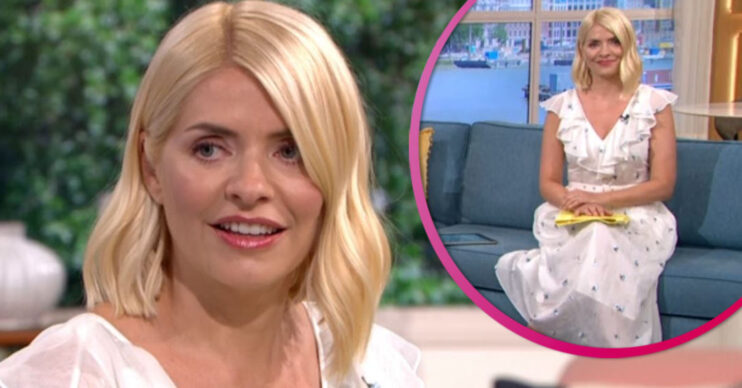 Holly Willoughby divided fans with her dress today on This Morning as some couldn’t believe the price.

The embroidered dress featured a v-neckline and gathered pleats at the waist.

However, the £450 price tag left some of her fans unimpressed.

What did Holly Willoughby say about her dress today?

Holly said on Instagram alongside a photo of herself posing in the outfit: “Morning Monday… it’s a hot one in London today…

While many fans gushed over the summery look, others took issue with the ‘expensive’ garment.

One person commented: “Wear something from your M&S range the average lady can pay.”

Another wrote: “Well that’s OK if you’ve got the £s but that’s [too] dear for the average working lady’s pocket that’s my wages for a month.”

One said: “Lovely dress but £450, ordinary people can’t afford this.”

A fourth added: “Beautiful dress, although out of most people’s price range, would like to see you wear more affordable clothes a little more.”

Others expressed their love for Holly’s outfit.

One person gushed: “What a stunning dress. You look amazing in it.”

Another said: “Love the dress beautiful.”

One added: “You are so so beautiful! Love this dress @hollywilloughby.”

Meanwhile, on today’s This Morning, Holly became freaked out after her co-star Phillip Schofield joked about a ‘haunted’ doll ahead of an interview with a couple who rehome ‘haunted’ dolls and toys.

Phil told Holly: “This has been part of this building for many years and is allegedly rabid with spirits and ghosts and I thought I’d give her to you.”

Phil added: “Maybe the fact you could be with her and spend some time with her might exercise those spirits and make her feel a little bit better about herself.”

However, after creepy music started playing, Holly squealed: “Stop it now! Stop it! Please stop it.”

What do you think of Holly’s dress today? Leave us a comment on our Facebook page @EntertainmentDailyFix and let us know.