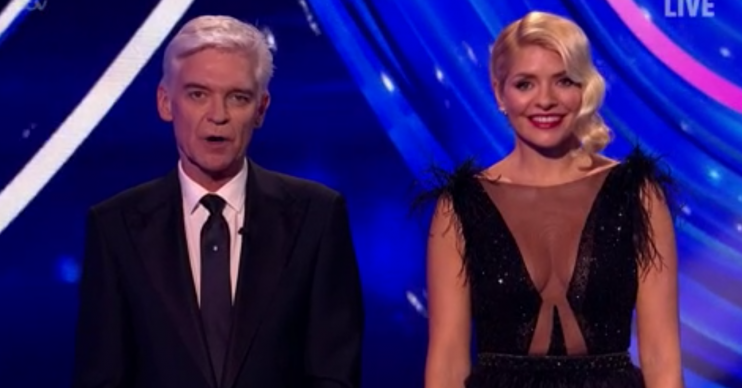 As sure as eggs is eggs, you can guarantee that Holly’s outfit on Dancing On Ice.

This week viewers have found something else to talk about; there are numerous comments on Twitter that the gorgeous mum-of-three chose her dress – which admittedly does show off her boobs to perfection – to take the heat of Phillip.

For anyone who’s been living under a rock the past few days, Phil dropped the bombshell on social media on Friday that he is gay.

This was followed by a surprise and very emotional sit-down interview on This Morning with best friend Holly.

Is it just a coincidence that on the same week that Phil comes out, so does Holly’s Willoboobies?!

The 57-year-old spoke emotionally about how he’d been grappling with the secret and had decided to speak out now for the good of his mental health, which was beginning to suffer.

He’s not been out of the headlines since and must have been aware that all eyes would be on him on tonight’s show to see what more he’d have to say.

In fact, Phillip chose not to reference it and when Ashley Banjo brought it up, the presenter looked embarrassed and said: “It’s not about me.”

Ashley broke off from talk about the skating to say: “Can I say just say Phil, big week and you have always been an absolute legend, but never more than this week, my friend.

Holly’s dramatic black number IS doing an impressive job at distracting plenty of viewers away from the co-host and, indeed, the skating!

Is it just a coincidence that on the same week that Phil comes out, so does Holly’s Willoboobies?! #DancingOnIce

@dancingonice At least Holly’s cleavage is making you take your eye’s off Schofield!

Schofe….” How can I distract the attention from me tonight?”

Is it just a coincidence that on the same week that Phil comes out, so does Holly’s Willoboobies?! #DancingOnIce

And Holly is getting the conversation of Phill by her very-on-show cleavage…. #doi #DancingOnIce

Nice of Holly to divert the gaze towards Philip. (@)(@) #DancingOnIce

What do you think of Holly’s dress this weekend? Leave us a comment on our Facebook page @EntertainmentDailyFix and let us know!