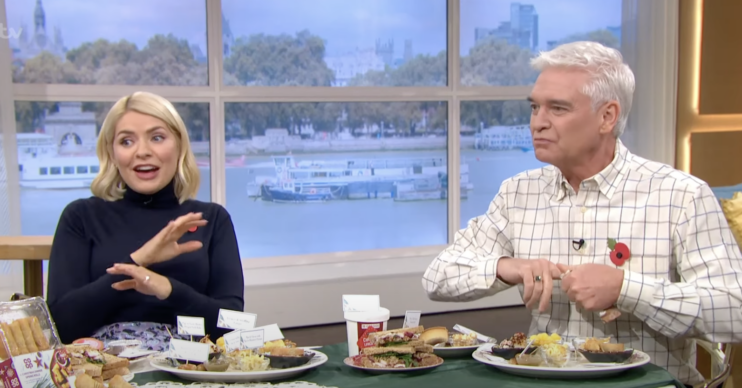 Holly has angered some fans for 'not trying new things'

Holly Willoughby came under fire from fans for refusing to take part in a Christmas food segment on Wednesday’s This Morning (November 10).

The star was co-hosting the show with Philip Schofield yesterday and they were testing out some of the Christmas foods currently on the market.

Read More: ‘Perfect’ Holly Willoughby sends Instagram fans into a frenzy as she shows off her incredible legs in mini skirt

But Holly refused to try some of the foods – much to the irritation of some viewers.

What food did Holly Willoughby refuse?

Philip was happy to snack on the foods prepared by Alice Beer, but Holly Willoughby was less keen.

Things started off well, with the 40-year-old presenter tucking into some Christmas pudding digestive biscuits and other festive treats.

But when the ‘Pigs in Snowy Blankets’ came out, she refused to try it, saying: “I can’t do it, it’s mixing too much,” she said of the flavours in the snack.

Philip, on the other hand, was loving it and repeatedly told his co-star it was nice.

Holly did try another couple of snacks, but she refused to taste the Greggs Christmas Lunch Soup.

Holly’s refusal to try all the Christmas snacks presented to her annoyed some This Morning fans and they took to Twitter to complain.

One said: “Holly’s refusal to try things really annoys me. Grow up woman and try something new for once in your life!”

“Oh Holly, be a bit more adventurous ifs,” another snapped.

“Holly doesn’t like anything tbh,” a third This Morning viewer remarked.

However, not everyone was against Holly Willoughby and her refusal to try some of the stranger Christmas snacks being offered.

“I like Brussels, do I want sprout ketchup? Hell no” another said in support of the presenter.

This isn’t the first time Holly Willoughby has been criticised by viewers for not trying new foods.

Only at the start of the week fans of the show were complaining that she was “wasting food”.

What do you make of Holly Willougby refusing to try some of the Christmas snacks on This Morning? Head to our Facebook page @EntertainmentDailyFix and let us know.