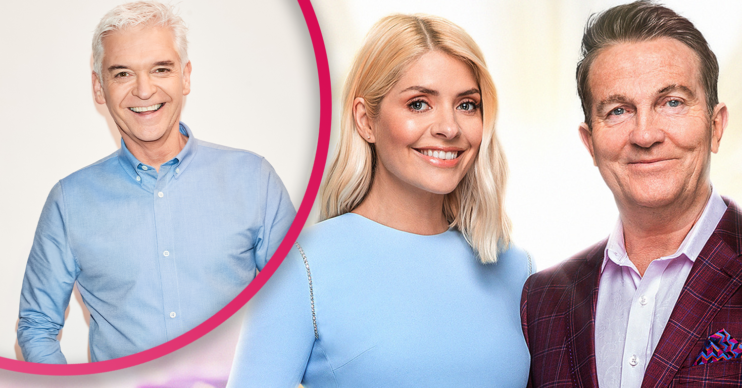 She's switched to the Beeb for a new Saturday night show

Holly Willoughby has delighted her Instagram fans after giving a sneak peak of her new Saturday night TV show.

Holly and This Morning co-host Phillip Schofield are currently enjoying a summer break, with Ruth Langsford and Eamonn Holmes at the helm of the ITV daytime show for the next six weeks.

However, for those who are missing Holly, there’s some good news.

Although some have said she’s “dumped” Phil for her new project.

Holly shared the trailer for her new show, Take Off With Bradley & Holly.

She captioned the video: “Morning! How are you?… just got sent this through of my new show with @bradderswalsh it’s called Take off… it starts this Saturday at 6pm on @bbc…

“So much fun was had filming this one and working with a total genius/wally.”

Read more: How are Holly Willoughby and Bradley Walsh friends?

The show will see contestants battle it out for a trip of a lifetime, presumably to be taken post-pandemic.

Hosts Bradley Walsh and Holly first fronted the show as a Christmas special back in 2019.

So what did Holly fans say about the show?

“Looks like fun. Can’t wait to watch,” said one.

“Can’t wait to see this on Saturday,” echoed another.

Read more: Bradley Walsh turned down Strictly – and here’s why he’ll never do it

However, others bemoaned the lack of Holly’s regular presenting partner.

One said: “Noooo you’ve dumped Philip!!! Weird seeing you host with someone else!!!”

“Should have been with Phil,” said another.

“Wow Holly working without Phillip! This will be strange!” said a third.

“It looks fab! @hollywilloughby!” said another.

“Although picturing you present with someone else is like watching @antanddec stand in the wrong order or with other people,” they added.

Some were a little more harsh, though…

Holly and Bradley defect to the BBC

Both Holly and The Chase host Bradley Walsh are regulars on ITV.

However, the new show is on the BBC, so some appeared to hit out at the pair for deflecting to the Beeb.

One was a little more harsh, though.

“ITV’s top presenters showing their loyalty by taking back handlers from the BBC. So sad and desperate,” they stated.

Take Off With Bradley & Holly airs Saturday (July 24) at 6pm on BBC One.