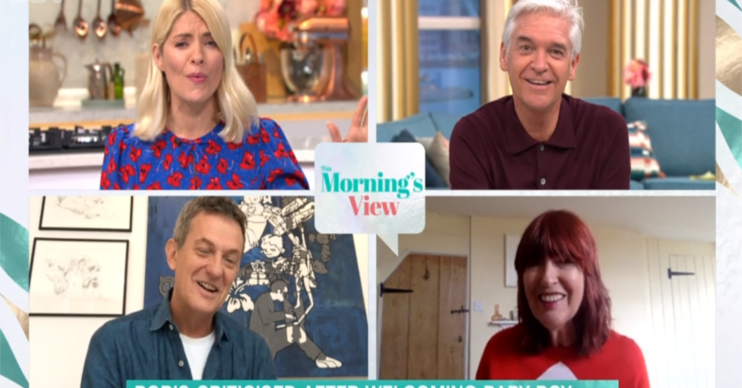 Janet suggested the birth of Boris' baby was not great timing

On Thursday’s This Morning (April 30), Loose Women star Janet shared her thoughts on the Prime Minister welcoming a son recently.

Boris welcomed his first child – a baby boy – with his fiancée Carrie Symonds on Wednesday.

What did Janet Street Porter say on This Morning?

Janet said: “I think that’s a bit mean but what I can’t quite cope with is all the celebration about the baby.

“The birth of any baby is fabulous but the timing of this baby’s birth is not great news for all of us locked up at home.

“I’m celebrating the birth of the baby but I’m not going overboard.”

She added: “I do think the timing was not the best.”

Phillip Schofield said: “But they couldn’t help that. Nine months ago they weren’t thinking, ‘in nine months time we could be in a bit of trouble.'”

Janet hit back: “Nine months ago, we were still in the midst of Brexit negotiations….”

Phil added: “So what? They’re in the middle of Brexit negotiations so they can’t think of having a baby?”

Janet said: “Well, if you want to be prime minister, where do you place all your…”

Holly interrupted: “But we don’t know anything about this. We don’t know whether they were trying for a long time.

“We don’t want to know or need to know.”

Janet said: “He has five children so you might want to ask yourself, ‘Why does he want a sixth child?'”

We don’t know! We don’t want to know or need to know.

Holly replied: “What about her?! Carrie is a human being in all of this.

“She’s just given birth to her first child, you can’t forget her in all of this surely?”

Janet said: “I don’t forget Carrie but I’m thinking about the man who’s meant to be getting us out of the worst crisis since the last war.

“He’s now got the pressures of having a small child who might keep him awake at night.”

Some viewers were shocked by Janet’s comments.

One person wrote on Twitter: “WTF is Janet Street Porter on about can’t have a baby because of Brexit and bad timing because of COVID-19?”

#ThisMorning wtf is Janet street porter on about can't have a baby because of Brexit and bad timing because of covid-19?????????

Another agreed: “Oh wow Janet how dare she get pregnant, what a ridiculous thing to say.”

A third added: “Janet Street-Porter criticising @BorisJohnson and @carriesymonds for the ‘inappropriate’ timing of the birth of their baby.

“This is getting ridiculous.”

Oh wow Janet how dare she get pregnant 🤦🏻‍♀️ what a ridiculous thing to say. #ThisMorning

What do you think about Janet’s comments? Head to our Facebook page @EntertainmentDailyFix and let us know