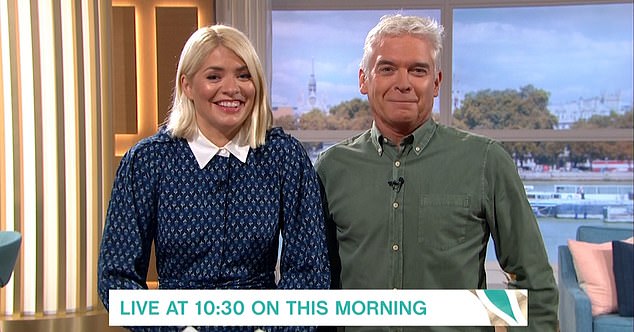 She’s no stranger to making hilarious slip-ups on This Morning and today, Holly Willoughby made another which left her co-star Phillip Schofield very amused.

Before Wednesday’s show started, the presenters told viewers what to expect from the programme, revealing Strictly Come Dancing pair Viscountess Emma Weymouth and Aljaz Skorjanec were going to be on.

But Holly, 38, struggled to pronounce Emma’s title and Phil found it hilarious.

Here’s what’s coming up on today’s This Morning… just about! pic.twitter.com/mgBYX9cB3g

Read more: Holly Willoughby glams up for night at the opera with her girlfriends

She said: “And Strictly’s Aljaz and his partner van-can… Emma’s waltzing their way to the studio.”

As she began laughing, Holly added: “We shall see you at 10:30… sorry, sorry,” as Phil was seen covering his mouth.

One viewer shared a snap of Holly hugging Phil after her gaffe to Twitter, alongside the caption: “The face of someone who made a mistake in the #ThisMorning preview!”

• The face of someone who made a mistake in the #ThisMorning preview! 🤣😂🤣😂 #viscountess pic.twitter.com/d9DczDVT6Z

At the end of the show, Emma and Aljaz spoke about their Strictly journey so far.

The pair admitted they were very emotional to find out they’d be dancing the foxtrot to the theme from the Downton Abbey movie.

Aljaz revealed: “It’s beautiful music – the theme tune to Downton Abbey – it’s so powerful. We actually cried when we heard it for the first time.”

Emma said she hopes her journey will be a long one, saying: “Even from day one, just learning steps you have that natural talent you do it really quick, so it gives us lots of time to work on the technique and performance, but I just love how you’ve thrown yourself into it. I’m loving every second of it.”

“I never want to let you down,” she told Aljaz.

Speaking about being away from her two young children – who are four and two years old – Emma said she’s “always up and down the motorway”.

She said: “My children are two and four years old, so I read them bedtime stories and put them to bed and then get in my car and drive up to London to be at work the next day.

“Your ordinary life doesn’t go away, this is all consuming, you’ve just got to balance it out.”

Emma also revealed Aljaz’s wife Janette Manrara has “calmed” her down ahead of the live shows.

She added: “They’re a dream team. We’re experiencing this whole range of emotions and they’re so solid and so supportive.

Read more: Strictly: Emma and Aljaz in tears after prep for this week’s dance

“You just don’t know how to feel and you doubt yourself.

“I’m very hard on myself, it’s my biggest flaw and I need to work on that.”