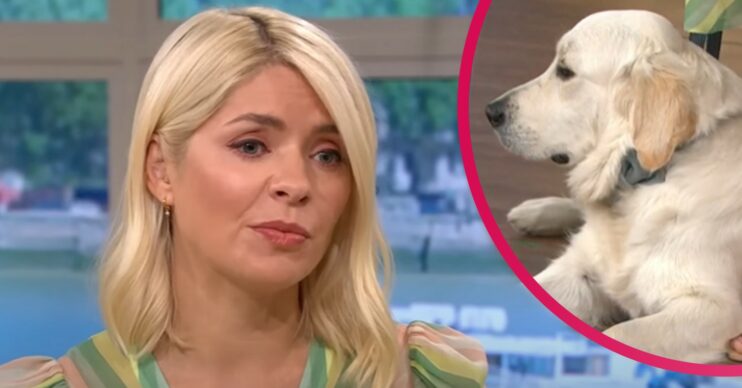 Concerned about what may happen

Holly Willoughby admitted she was feeling ‘anxious’ about a guest on This Morning earlier today (Wednesday June 22).

Presenter Holly, 41, told viewers she was concerned about what may happen as she likened the uncertainty to having her children in the studio.

However, rather than referring to an unruly celebrity creating mayhem backstage, Holly was actually referring to her pet dog Bailey.

Holly Willoughby on This Morning today

As the episode began, Holly confessed to fellow host Phillip Schofield about how Bailey’s presence had her on edge.

She told him she was worried the pooch might chaos on set… especially as he’d already caused a bit of a kerfuffle before they went live.

“It is a bit like having your kids here because you get that anxiety that anything could happen at any moment,” Holly said.

And it seems Bailey was already in the dog house with her owner.

Holly continued: “She’s already slightly let herself down this morning.

“Being quite a big dog with a big waggy tail, she walked straight past Phil’s cup of tea and knocked it clean off. It doesn’t look that bad.”

“She is cute, she is cuddly,” Holly conceded.

“But she does have a very bad habit of leaving fluff around my house.”

And that’s why Bailey was part of the broadcast.

A segment later in the show featuring Aggie MacKenzie focused on cleaning tips about pet hair in the summer.

And clearly Bailey is dropping plenty of fluff as the weather continues to heat up.

A snap shared by Holly on Instagram ahead of the show illustrated just how much fur Bailey has going spare.

With Holly holding a handful of white hair after giving Bailey a brush, her Insta followers said how much they could empathise.

“Same but we have this amazing pet hoover to get it all off,” commented one fan.

Another wrote: “My golden girl’s coat is crazy in summer because of her undercoat!”

Meanwhile, someone else joked: “You could spin that fur and make a tiny jumper.”