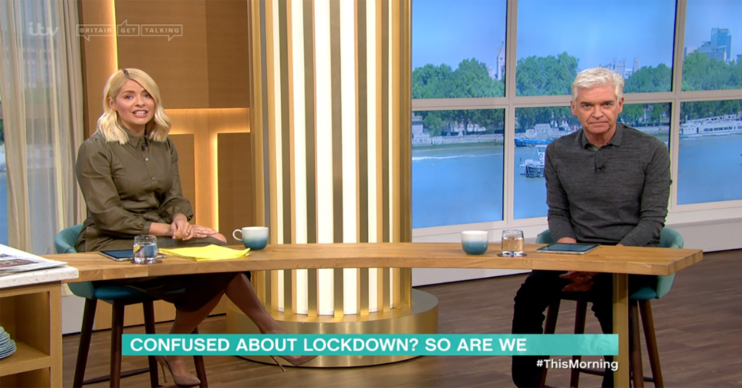 They did not understand guidelines

She and Phillip Schofield were scathing about the new guidelines.

In it, he urged people to get back to work if they can, but not to use public transport.

The Prime Minister also suggested some school classes could be resumed in June.

He also said we now have unlimited exercise and we’re allowed to sit in parks as long as people remain socially distant.

But the This Morning presenters said the guidelines left them deflated and confused.

And they did not hold back in making their feelings known.

“The problem is, we’re all just about holding on,” Holly said.

“We’re doing so well to keep our spirits up. But when there’s this level of confusion, it knocks you back.

“When you feel like you’re just keeping afloat, it just knocks you back again.”

And her feelings were shared by Phil.

Holly and Phil tipped over the edge

He said: “Well, that’s the trouble with this morning because we now lack clarity. I understood, until last night.

He then launched into a rant to rival Holly’s.

Phil said: “You literally couldn’t write this. It is utterly astonishing and you know we’ve been really level on here but now this has tipped us over the edge.”

Addressing Dominic Raab’s comments that the public can now meet one family member from a safe distance, Phillip  added: “What are we allowed to do?

It is utterly astonishing and you know we’ve been really level on here but now this has tipped us over the edge.

Holly summed it up: “We don’t understand.”

Do you agree with Holly and Phil? What kind of clarity do you think the government needs to give over lockdown? Head to our Facebook page @EntertainmentDailyfix and leave a comment to let us know.