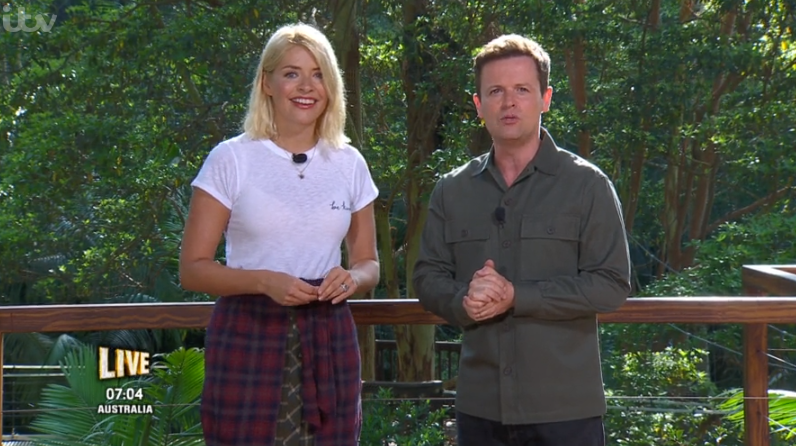 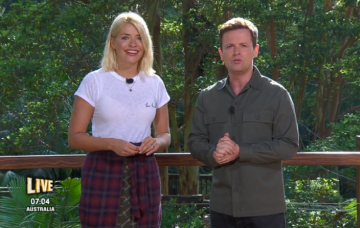 It comes after reports at the weekend

At the weekend, it was claimed Holly, 37, had managed to double her pay packet thanks to her success on the show.

It was also reported that she was costing producers a lot of money as she has a team of 13 people around her in Australia including her stylist, her agent, her family, her parents and tutors for her children.

And on last night’s show, Dec couldn’t help but make a little joke about the reports.

While discussing the campmates hygiene, Dec joked he wore an aftershave called Bruce for Blokes, which cost “$2 a litre”, to keep him smelling good.

Holly replied that the heat sometimes gets to her too, to which Dec said: “You know what you need? Sheila for Girls? Slightly pricier, three dollars a litre.

“But you can afford it! I read how much you’re getting for this, and I read all about the entourage, as well. The entourage, Holly.”

Holly burst into laughter before the duo continued with the show.

It comes after the Mail on Sunday claimed Holly had doubled her earnings to £5 million after taking over hosting duties on the show from Ant McPartlin.

The mum-of-three was apparently already taking home £2.5 million for hosting This Morning and Dancing On Ice, as well as her job on Celebrity Juice.

But after ratings for the I’m A Celebrity launch soared to 11.9 million, up 700,000 on last year, it seems bosses are prepared to pay her for it.

A source told the publication: “ITV want to make it clear that she is theirs and they are prepared to pay her for it.

“With the exception of Ant and Dec, Holly is their most popular and well-known presenter – and they see her as their main appeal to the female market.

“She has got herself in a place where she can ask for what she wants and ITV will pay her what she is worth. Negotiations on a new contract will start imminently.”

Meanwhile, the Mirror recently claimed Holly was costing the show producers £63,000 in fees by having her family, including husband Dan and their three kids, join her in Oz as well as her parents, agent and stylist.

ED! has contacted representatives for Holly and I’m A Celebrity for comment.

Are you enjoying watching Holly co-host the show? Leave us a comment onour Facebook page @EntertainmentDailyFix and let us know what you think.