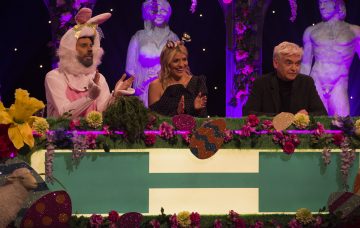 Holly Willoughby admits to worries about wetting herself on This Morning!

This Morning host Holly Willoughby has admitted she has nearly wet herself on the show on more than one occasion.

The 37-year-old reveals during tonight’s Celebrity Juice Easter Special she sometimes finds colleague Phillip Schofield so hilarious she has to drop down out of shot in the studio in order to avoid soiling herself.

The subject of Holly’s involuntary bodily functions first came up during the Celebrity Juice recording as she tackled the show’s wibbly wobbly board challenge, attempting to describe animals to team mates Phil and Rylan Clark-Neal as she was vibrating away.

“My only slight issue is I need to go for a wee… so this is going to be interesting,” she said as she clambered aboard the board, covered with a huge image of Jonathan Ross’ face.

Thankfully, it seems Holly managed to keep it in. But the subject came up again, with host Keith Lemon asking about the biggest slip up she has ever made on This Morning.

Holly replied by elaborating on a moment from last June where she stifled a fit of the giggles and a potential pant-wetting incident by crouching down on the This Morning studio floor after being tickled by a mention from Phil about tasting pal Fearne’s cupcakes.

“Many a time!” she said following Keith’s suggestion she may have nearly piddled herself while presenting.

Indicating Phil, she continued: “He makes me laugh sometimes and you just see me drop out of shot because I have to squat down in case I do actually wet myself.

“The other thing he does all the time is try and make me jump which is actually quite an easy thing to do.”

What a lovely wee story…

Celebrity Juice is on ITV2, Thursdays at 10pm.