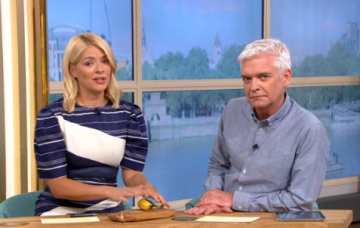 Holly Willoughby admits she’s jealous of the Duchess of Cambridge

She confessed her envy on This Morning!

Holly Willoughby confessed on Monday’s This Morning that she was envious of the Duchess of Cambridge going into labour.

While it might sound unusual to be jealous of someone going through what can be a very painful experience, Holly said it was because of the “magic moment” that’s to come for Kate and William when the baby is born.

“Whenever I hear someone is in labour I get filled with this inner jealousy because it’s just the most magic moment when you hold that baby for the first time,” Holly said as they crossed to a reporter outside the Lindo Wing on the show.

Kate gave birth to her third child – another son – at the London hospital today. The yet to be named royal, who is fifth in line to the throne, is a younger brother for Prince George, four, and Princess Charlotte, two.

Holly, 37, said of Kate’s labour: “This is her third one so she knows very much what she’s doing now so I hope in a weird way she’s enjoying this time, I really do.”

Her co-host Phillip Schofield chipped in: “She might be watching the telly, you never know – morning Ma’am!”

Holly is a mum of three herself – and also had a daughter and two sons like the Duchess.

She has Harry, eight, Belle, seven, and Chester, three, with husband Dan Baldwin.

Earlier in the show, the presenter had successfully predicted that Kate and William would have a boy using a psychic banana!

She also said it was her own belief that the baby would be a boy – and she’s predicted his name too.

She told co-host Phillip: “I think it’s going to be a little Albert. Bertie. That’s what I’m going for. I think it will be a boy. What do you think?”

Kensington Palace announced at midday that Kate, 36, had delivered a boy an hour earlier, weighing 8lb 7oz with the Duke of Cambridge by her side.

The 35-year-old prince was later seen leaving the hospital saying he would be “back in a minute”, returning with Prince George and Princess Charlotte in tow to meet their new sibling.

The world’s media are currently camped outside the hospital for the first glimpse of the latest addition to the royal family.

Were you jealous when you heard Kate was in labour like Holly? Leave us a comment on our Facebook page @EntertainmentDailyFix and let us know what you think!