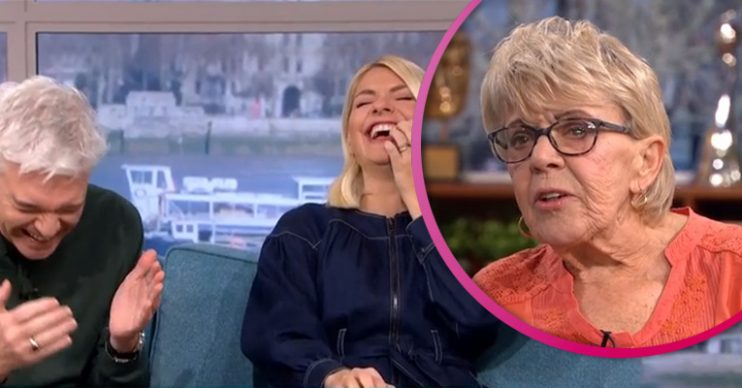 They have a 45-year age gap

TV’s Holly Willoughby and Phillip Schofield were left gobsmacked when a woman described a night of passion with her toyboy lover.

Iris Jones, 80, appeared on Tuesday’s This Morning to talk about her romance with 35-year-old Mohamed Ahmed Ibriham after they found love on social media.

Within just two weeks of chatting online, Mohamed proposed and Iris flew out to Cairo, Egypt, to meet him in person.

Speaking about her romance, Iris explained: “He proposed after 15 days. I said, ‘you are absolutely mad! How could you have feelings for a woman you’ve never met?'”

When asked if she thought for a moment Mohamed could have been trying to scam her, Iris told the hosts: “Lots of people warned me about that, my sons, friends, but I knew from the conversations we had that he was very very genuine.”

Iris then went on to talk about her visit to Cairo and the first time she met Mohamed face-to-face.

When asked about their first night together, Iris admitted: “The first night, pretty rough. It was rough,” as she laughed.

There’s just some things we never thought we’d hear on the show, but we loved Iris’ honesty!

Hear the full story on our free app!

As Phil and Holly looked slightly stunned, Iris continued: “Nobody had been near me for 35 years. I thought I was a virgin again.

“Can I say what we used? A whole tube of KY Jelly. Thing is, I couldn’t walk the next day,” as the hosts burst into laughter.

Can I say what we used? A whole tube of KY Jelly.

“I felt as if I had been riding a horse. Saddlesore wasn’t in it. Anyway, we got over that. The sex is not the important thing because I can’t sleep with him.

Viewers were also left in hysterics over Iris’ comments and shared their thoughts on Twitter.

One person said: “This made my bloody day…so funny bless her. I say good for her.. you get it iris if you can stock up on the KY.”

Another wrote: “OMMG!! Did that woman just say that on #ThisMorning @thismorning haha dying.”

A third added: “Best thing I’ve ever seen on #thismorning @thismorning. This woman is fantastic.”

This made my bloody day…so funny bless her. I say good for her..u get it iris if u can 😂😂 stock up on the KY

OMMG!! Did that woman just say that on #ThisMorning 😂 @thismorning 🐎 🐴 haha dying

Best thing I’ve ever seen on #thismorning @thismorning
This woman is fantastic. 🐎 pic.twitter.com/2UatMHiuGw

This woman on #ThisMorning has made my day🤣🤣A whole tube of ky jelly… pic.twitter.com/BApJcURFUb

This woman on this morning has got me in stitches😂😂😂 #ThisMorning

Iris added that her sons have now warmed to Mohamed as they realised she’s happy.

Iris said that she’s hoping Mohamed can come over to the UK to live but if he can’t, she’ll move to Cairo despite “hating the place”.