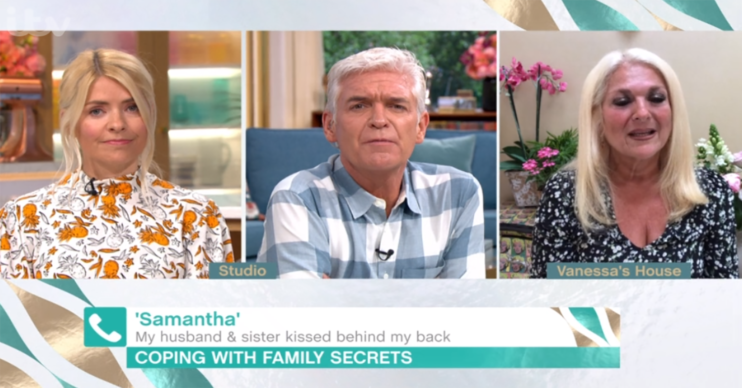 Samantha said she's struggling to get past the incident

TV’s Holly Willoughby and Phillip Schofield were shocked as a This Morning viewer revealed her sister kissed her husband.

Samantha called the show to get advice from agony aunt Vanessa Feltz in a segment titled “coping with family secrets”.

She explained three years ago, when she was pregnant with her child, her husband and her sister shared a kiss.

Read more: Phillip Schofield stunned by cougar gran’s comment about his sex life on This Morning

She said: “They blamed each other for initiating it and nobody would tell me who did what and I don’t know how to get past it.

“I don’t know how to get the truth out.”

Holly said: “This is such a betrayal on so many levels isn’t it Vanessa?”

Vanessa said: “Yes, it’s absolutely heartbreaking. You want to do what everybody else wants to do under those circumstances which is find out every single detail.

“But all you do if you revisit all of that is extend the torture and the pain so you feel even more ghastly.”

She added: “I think it’s a thing that you can just put down to a terrible mistake and try, if you possibly can, to put it behind you.”

Samantha revealed her husband has blocked her sister on social media and blocked her phone number.

Samantha added: “We’re quite close in age so we’re really close. I can go weeks having days out with her, obviously not at the moment, and then other weeks I’m like, ‘I can’t even look at you.'”

Holly said: “I don’t think you can brush it under the carpet and act like it never happened because it will come out somewhere.

“I think you need to resolve it once and for all. Has she even apologised?”

Samantha said: “She didn’t even admit that it had happened.”

Holly replied: “That’s what I mean, you can’t move on!”

Samantha also revealed that her husband and sister were once spotted in a car together.

Phil said: “Oh hold on a minute, then that’s not one kiss? Do you think there was more than a kiss?”

Samantha replied: “I don’t even want to think about it, I don’t know.”

What advice would you give Samantha? Leave us a comment on our Facebook page @EntertainmentDailyFix and let us know.