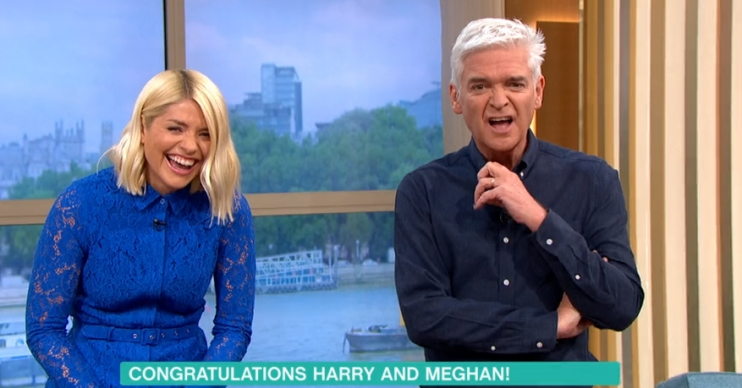 Holly Willoughby and Phillip Schofield couldn’t resist but poke fun at Prince Harry over his baby announcement on today’s This Morning.

The Duke of Sussex confirmed the arrival of his first child, a son, with wife Megan with a short statement to the media on Monday afternoon.

Wrapping up the TV broadcast, new dad Harry turned towards two stables which contained horses and said “thanks guys” to the animals.

Speaking about Harry’s sweet gaffe, Phil and Holly joked that he was “delirious” as he had probably been up night as Meghan gave birth.

As a clip of Harry thanking the horses played, Phil joked: “He’s delirious!”

Holly added: “He’s been up all night and it’s all been very stressful but he’s there and he’s just thanking the horses.”

Mocking Harry’s speech, Phil said: “Thank you, thank you all. Thank you. Ooh there’s a little ant, thank you.”

This is the moment Prince Harry announced that his wife Meghan, the Duchess of Sussex, had given birth to a baby boy 🎉🍼.

Bursting out in laughter, Holly said: “I love that he chuckles after he thanks the horses.”

The mum-of-three paid tribute to Baby Sussex with her outfit for the daytime show.

The presenter sported a blue lace dress from Ganni with a pair of nude heels from Gianvito Rossi.

It’s been said the little boy could be given the title of the Earl of Dumbarton – the title Harry was granted by his grandmother the Queen on the morning of his wedding last year as well as being given a dukedom.

What did you think of Harry’s speech?Let us know what you think by leaving a comment on our Facebook page @EntertainmentDailyFix!