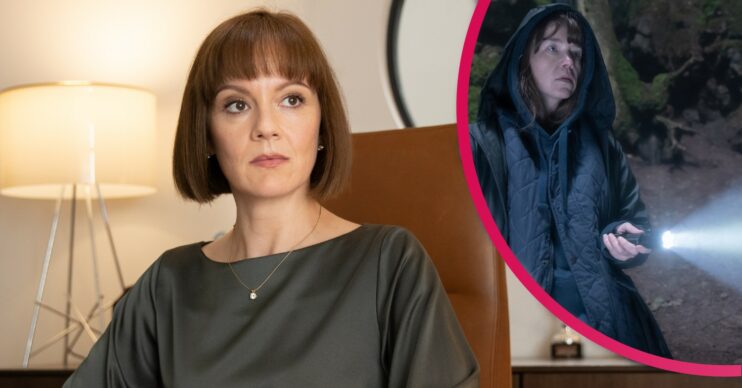 It was all happening last night!

We got more confirmation that children Ben and Eva were involved somehow in the murder of Alex Boyd, some sister v sister battles and a big twist right at the end.

Hollington Drive episode 2: Why did Theresa lie so spectacularly?

You could also add: Why didn’t Theresa just go to the police when she knew both Ben and Eva were involved?

The fact is, crime dramas often feature characters who do the wrong thing. Every. Single. Time.

And last night, when both Ben and Eva admitted to seeing the body of Alex Boyd and then dumping it into the water in the woods, we all shared Theresa’s horror at the possibility that her son and niece could have had actually killed someone.

Read more: Where is Hollington Drive filmed? Is it a real street and how much do houses cost there?

So what is a mother to do to protect her children? Lie, obviously.

The question is now whether Theresa will manage to climb out of the enormous hole she dug for herself.

She lied about being in the woods to DS Parks and then she actually fingered a suspect from a catalogue of dodgy local men.

Just to divert attention away from the kids.

Why did Helen put down toilet roll on the toilet seat during their telephone conversation?

When Theresa did spin her untruths to DS Parks she rushed up to the toilet in her house to ring Helen.

Except Helen was at the mortuary with Gareth Boyd helping him to identify Alex’s body.

She had to sneak out to the loos to take the call from her panicked sister.

Viewers then noticed that she put down pieces of loo roll to cover the seats – even though she was fully clothed and the seat wasn’t actually up.

Creator Sophie Petzal answered on Twitter: “There was so much confab about the toilet roll. It was hilarious.

“‘Why is she putting down toilet roll? Is that a thing people do???’ Rachael got it! ‘she doesn’t want to sit on the disgusting seat.’ A like minded soul.

What will happen to Helen and Gareth?

Helen and Gareth held hands while the latter identified his son’s body at the mortuary.

But surely these two can’t continue their illicit affair with everything going on.

Or perhaps their affair actually led to Alex’s death (see all the latest theories here).

Whatever’s going to happen, there’s going to be a point when the affair will be revealed…

Hollington Drive episode 2: Are Ben and Eva now in the clear?

At the end of the episode, when Theresa was naming her ‘suspect’ DS Parks told her that Alex Boyd had actually been murdered on the Saturday night.

Not on the Sunday afternoon when Ben and Eva went walkabout.

Unless these two 10-year-olds managed to sneak out of their respective houses at night (unlikely) the focus now switches to the adults.

And if this means Ben and Eva are in the clear, it means that there are a whole new bunch of suspects to consider.

If they are in the clear, why did they tell Theresa and Helen lies?

If Ben and Eva have alibis for Alex’s murder, it still doesn’t excuse them for the heinous bullying they submitted the young lad to.

But the question remains: Why did they make up stories about that Sunday afternoon?

Were they just trying to save their skin, as Ben has always maintained?

And what did they put in the bin?

That question also still remains – if Ben and Eva didn’t kill Alex, what did they put in the bin when Theresa found them in the woods?