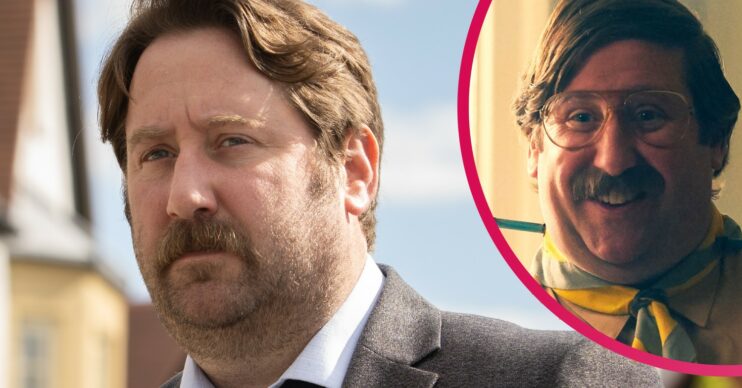 The actor is best known for his comedic performances...

Fans of Ghosts and Horrible Histories may get a shock when they tune in to watch Hollington Drive and see Jim Howick in a very different role indeed!

Jim Howick plays DS Parks in ITV1’s much anticipated thriller on ITV1 – but what has he been in before?

How old is he and is he married?

Here’s everything you need to know about the actor.

He is called to investigate when a young boy goes missing in the seemingly idyllic suburb of Hollington Drive.

DS Park arrives to question the family and neighbours of 10-year-old Alex Boyd when he disappears.

As each new detail in the police investigation is announced, Theresa (Anna Maxwell Martin) withdraws from those around her.

She is terrified that her son Ben may have done something unthinkable.

Will DS Parks gets to the bottom of the mystery?

He’s been on our TV screens since 1997, when he played various characters in the comedy sketch show The Armstrong and Miller Show.

As well as portraying many comedy characters in the likes of Mutual Friends, Comedy Showcase and The Kevin Bishop Show, he’s also appeared in the film Hellboy as Corporal Matlin.

From 2003 to 2015, he played various characters in Horrible Histories, and has also popped up in Inside No. 9, The Aliens and Stag.

Most recently, he is known for his role as Pat Butcher in Ghosts, and Paul Jessop in Pandemonium.

Along with the five other members of the Horrible Histories cast, Jim Howick is also the co-creator, co-writer and co-star of Yonderland, an eight-part family fantasy comedy series that premiered on Sky One in 2013.

It’s not all about the laughs, though.

Read more: Ghosts on BBC One: New series has viewers losing sleep as the binge all episodes

In 2013, Jim and his co-stars left Horrible Histories to pursue other opportunities.

Among the many characters Jim played, some of his most recurring ones included Shouty Man, George IV of Great Britain and Richard III of England.

Horrible Histories was revived in 2015, but the six original members of the main cast didn’t return.

He keeps his personal life incredibly quiet, but we do know that she’s a costume assistant for TV.

It is not known if the pair have children.

How old is Jim Howick and where is he from?

He is currently 42 years of age.

He graduated with First Class Honours from Mountview Academy of Theatre Arts in 2000.

Hollington Drive starts on Wednesday September 29 2021 at 9pm on ITV1 and the ITV Hub.

Are you looking forward to watching Hollington Drive? Leave us a comment on our Facebook page @EntertainmentDailyFix.