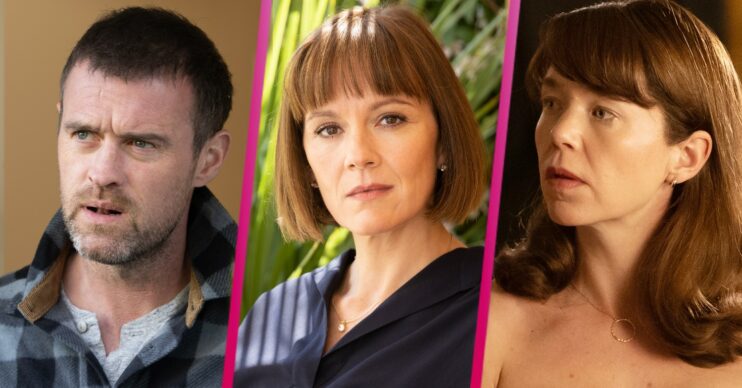 Hollington Drive on ITV1: Who is in the cast opposite Anna Maxwell Martin and Rachael Stirling?

The four-part thriller stars some of our TV favourites!

Hollington Drive promises to be THE next big thriller to rival The Bay, Innocent and Vigil – so who’s in the cast?

Here’s everything you need to know about who is in the cast of Hollington Drive.

The story centres around Anna Maxwell Martin’s character and her sister Helen, played by Rachael Stirling.

The sisters appear close and their families enjoy spending time together, until a catastrophe questions everything they thought they knew.

When Theresa’s 10-year-old son, Ben, goes to play in the park with his cousin Eva, something happens that changes their lives forever…

Of course, TV viewers will recognise cast member Anna Maxwell Martin from her role as Carmichael in Line of Duty.

She is also well loved for her role as Julia in Motherland.

Before that, she starred in The Bletchley Circle, South Riding, Bleak House and even opposite Daniel Craig in Enduring Love.

Helen is the elder sister of the two, and described as the “sensible, pragmatic, practical one”.

She is now a primary school headteacher and a pillar of the community.

Actress Rachael is also a pillar of the acting world – just like her famous mum, the late Dame Diana Rigg.

Fans of detective series might recognise Rachael from her recent cameos in Grantchester and Midsomer Murders.

She also played Emilia in Love in the Lockdown, Kelly Aston in Life, and Mary Harborough in Wild Bill.

Coincidentally, Anna and Rachael both co-starred in The Bletchley Circle.

We know that Theresa and Fraser have a perfectly manicured garden – but is their marriage as flawless?

Fraser is described as “a really good guy – a good father and a good person”.

Viewers may recognise him from his recent role as Nathan in Finding Alice.

From the off, it’s clear that there are complexities and difficulties for Helen and David’s relationship.

In fact, it’s a “fairly unhappy marriage” and David is “a very depressed man” who has given up work and is at home a lot.

He’s also known for The Last Kingdom, Thirteen, No Offence and Moone Boy.

Amelie Bea Smith plays Helen and David’s daughter Eva – who is at the centre of the dramatic events.

Soap fans will recognise actress Amelie Bea Smith from her role as Daisy in EastEnders from 2018 to 2019.

She also played Flora in The Haunting of Bly Manor, and has voiced the animated Peppa Pig ever since 2020.

Jonas Armstrong portrays Gareth – a character we can’t tell you much about without serious spoilers.

Let’s just say he is connected to Helen and David’s marriage, or perhaps entangled is a better word.

Gareth is married to Jean, and they have a son called Alex who goes missing in episode one.

Jonas is an actor probably most famous for playing Robin Hood in the BBC series of the same name between 2006 and 2009.

He also played Anthony Millington in Teachers, Steve in Prisoners Wives, Ben in Hit & Miss, and Joe in Line of Duty.

Most recently, he portrayed Jason in The Drowning, and Sean Meredith in The Bay – also playing a father whose child goes missing.

Hollington Drive on ITV1 – who else is in the cast?

Completing the impressive Hollington Drive cast is newcomer Tia May Watts as Georgina.

What is ITV thriller Hollington Drive all about?

The series focuses on the lives of sisters Theresa and Helen.

The series begins when the two families have a barbecue on a hot, sunny day.

The atmosphere changes when Theresa’s 10-year-old son Ben asks to play in the nearby park with his cousin Eva.

Theresa’s partner Fraser is fine for them to go, but Theresa is anxious.

When the two children don’t return on time, Theresa goes out to look for them.

Her suspicions are heightened when she finds the children on the edge of a woodland area and they appear to be fighting.

Immediately her instincts tell her something terrible has happened.

Her instincts are proved right when later that evening distraught neighbour, Jean, knocks on their front door.

Hollington Drive starts on Wednesday September 29 2021 at 9pm on ITV1.

Will you be tuning into Hollington Drive on ITV1? Leave us a comment on our Facebook page @EntertainmentDailyFix.