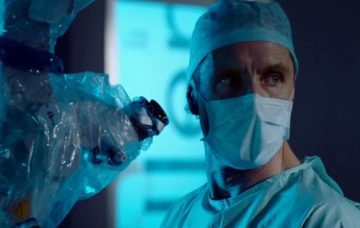 Isn't he supposed to SAVE lives?

Forget Lachlan White and Pat Phelan, there’s an evil new murderer in town – and he’s possibly the worst of the lot.

Professor Gaskell, whose job it is to SAVE lives, has done the unthinkable and murdered Roxanna MacMillan.

Holby City fans were outraged and upset last night (Tuesday 25 September), when Gaskell chose to kill Roxanna in order to protect his dangerous and experimental research.

Even more Machiavellian, Roxanna is the woman that Gaskell is supposed to have LOVED.

In shocking scenes, the Professor (portrayed by Paul McGann) went to horrifying lengths to keep his guilty secret under wraps – that his entire career is a fraud – when he murdered the fellow neurosurgeon.

He’d already sabotaged Roxanna’s potentially life-saving operation, an act that left her with locked-in syndrome, unable to communicate or move.

But, when Roxanna (Hermione Gulliford) tried to communicate using a board of letters, Gaskell decided to sacrifice her to protect himself.

The evil medic injected a neurotoxin into Roxanna’s IV, causing her to flatline.

BBC viewers will know that Gaskell’s experimental trial is built on lies, as the original patient he ‘cured’ didn’t even have motor neurone disease in the first place.

When Roxanna discovered the truth, Gaskell threatened her and caused her to run into the path of Meena’s car.

In ever more sinister scenes, Gaskell leant forward to tell the patient: “I know you understand. The only way of making history is to keep going.

“All those times I wavered, you gave me strength. I love you. I always have – you know that, don’t you?”

Funny way of showing it, mate!

Although a desperate Hanssen fought to save Roxanna’s life, she eventually passed away.

And BBC viewers were saddened to say goodbye to the character, and scared of Gaskell’s next move.

One wrote: “Oh @hermy1G You’re really going to be missed so much from us Holby fans. We really hoped Roxanna pulled through. I’ll be cheering your friends on when they go after Gaskell!”

Another said: “Why can’t anyone see through Gaskell in Holby… this is why I’m medicine you can be friends but you have to stay objective external and never just take someone’s word. It’s scary to think there probably are surgeons like Gaskell in the world.”

Why can’t anyone see through Gaskell in Holby… this is why I’m medicine you can be friends but you have to stay objective external and never just take someone’s word. It’s scary to think there probably are surgeons like Gaskell in the world. #HolbyCity

What a show Holby was last night. Looks like Gaskell has actually killed Roxana off.

Oh @hermy1G You're really going to be missed so much from us Holby fans. We really hoped Roxanna pulled through. I'll be cheering your friends on when they go after Gaskell! #HolbyCity

the acting in holby is outstanding there’s absolutely no denying that for a single second.. but watching gaskell do what he did to Roxanna tonight made me feel sickened. I’m heartbroken. 💔 can’t believe it, I hate gaskell more than I ever have. #HolbyCity

A third typed: “Just caught up on @BBCHolbyCity OMG!! I can’t believe Roxanna is dead, gutted I loved her character @hermy1G you’ll be missed  Gaskell needs to be stopped.”

Many called for the deranged Professor to be found out and thrown in jail.

Will his sick and evil actions be discovered? Or will he kill again?

Do you think Holby City is better than ever? Leave us a comment on our Facebook page @EntertainmentDailyFix and let us know what you think!