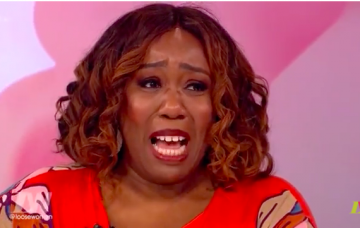 The actress spoke about her depression on Tuesday's Loose Women

Actress Chizzy Akudolu has spoken about hitting a “massive low” with depression after being voted out of last year’s Strictly Come Dancing.

In an appearance on Tuesday’s Loose Women, the former Holby City star said: “I do suffer from depression. I’m not ashamed to say that at all. It’s not something I asked for.”

The 44-year-old, who was first to be voted out of last year’s series of Strictly, said: “It’s something I’m dealing with.

“I’m still on anti-depressants. I have therapy. I had quite a bit of therapy after Strictly. I just want to say that the show did offer me a therapist, I said, ‘No I’ll be fine, it’s just a show, just a show’.

“I did hit a massive low with my depression after Strictly.”

Speaking to panellists Ruth Langsford, Coleen Nolan and Nadia Sawalha, the actress added of being voted out first: “There was a bit of embarrassment and there’s all these plans you have in your head of future dances.

“And I’ve wanted to do the show for so long, and to get to do it… and I was getting fitter. And then for it suddenly just to be taken away, it was crushing.”

To make matters worse, Chizzy was celebrating a birthday when she was knocked out.

She explained: “It was my birthday the following Saturday. Who gets to dance on Strictly on their birthday? Well, not me!”

The TV star said she was diagnosed with depression while she was starring on BBC soap, Holby City.

She explained: “I was diagnosed about three and a half years ago. I think there’s been something there, but I’ve just always gone, everything’s fine!

“I’d just be sitting in the makeup chair and start crying. People would say, ‘What’s wrong?’ and I’d say, ‘I have no idea’. I’d start to get a bit angry, when I felt the crying coming, I’d get angry as I didn’t want people to see.”

The London-born star recently confirmed she was having meetings in the US about possible roles in the States.

She told The Sun: “New year, new challenges, new Chizzy. I left Holby City to go to America, then Strictly came up so I put it on hold.”

Chizzy revealed that she’s bagged herself a manager and applied for a visa.

Once that comes through, she can start looking for work, and she admitted that, right now, she doesn’t mind what kind of work that is.

She added: “I’ve written a film and I’m going to be filming the teaser in January. I’m on the train and I refuse to get off.”

Are you a Chizzy fan? Leave us a comment on our Facebook page @EntertainmentDailyFix and let us know what you think!