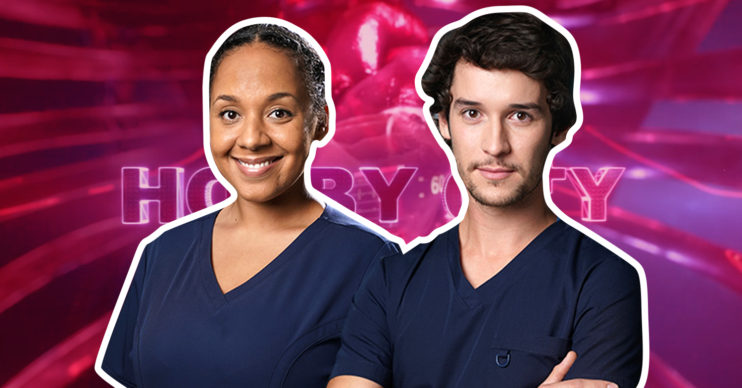 Holby City star Nic Jackman has hinted there could be romance on the cards for his character Cameron and Nicky.

As fans know Cameron and Nicky are housemates as well as colleagues. However last year the two did end up sharing a kiss and waking up in the same bed.

While Nic is unsure whether Cameron will reignite his spark with former flame Chloe, he thinks the doctor may have his eye on someone else!

Speaking to the Daily Star he said: “I actually don’t know about Cameron and Chloe, but I can hint at something happening between Cameron and Nicky that we may soon see on screen.

“It feels like where we’re at at the moment is that Cameron kind of knows that’s [relationship with Chloe] not going anywhere.

“There’s still feelings for her but he kind of knows it’s not going to happen. She won’t let it happen.

“I think Nicky is just a brilliant friend, and lovely and hard working, and Cameron recognises that and kind of manipulates her because she is fond of him. So I feel really sorry for Nicky.”

This week, Nicky was forced to choose between her career and her mum after Tracey began to meddle in her life.

Recently Nicky suffered a heart attack. But when Tracey refused to stop fussing over her daughter and moved in with Nicky, Cameron and Chloe, she started to tear the trio apart.

Meanwhile, Cameron has recently proved to have a much darker side after the shock death of his colleague Xavier. After witnessing him fall and hit his head, Cameron left Zav and took the evidence his colleague had, proving Cameron’s involvement in Evan’s death.

Xavier later died from his injuries.

While some BBC TV shows, such as EastEnders, have returned to filming, there has been no word when Holby City will resume.

The medical drama took a break earlier this year, pulling episodes from air, but broadcasting has resumed.

Holby City airs at 8pm on BBC One on Tuesday nights.

Visit our Facebook Page @EntertainmentDailyFix and let us know what you think.