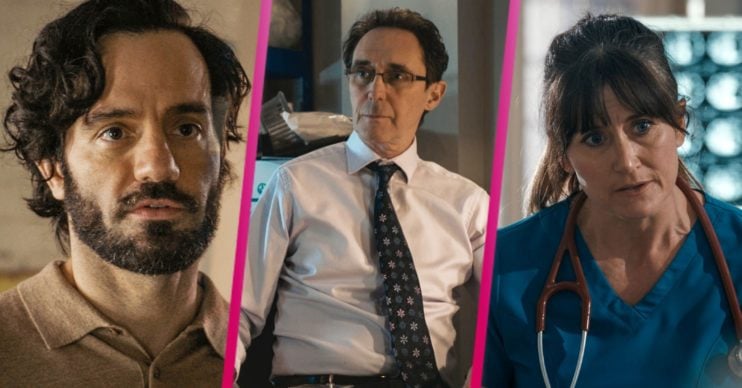 Meanwhile it looks like there could be a new love interest for Fletch.

A ‘majax’ – a major accident – strikes Holby City which leaves pupils from Hanssen’s school fighting for their lives.

Josh has become aware of Hanssen’s self-harming and worries that he will struggle to cope.

He tries to speak to his boss about what he saw in the basement. But can he persuade him to seek help?

Kian, who is struggling with a secret drug addiction, has been getting support from Lucky.

Lucky begins to grow frustrated with Kian’s lack of gratitude towards her, as she is risking her job to help him.

But soon things get worse.

Kian is distracted when Andrei approaches him with a new problem. Will he be able to help?

Max recently took the blame for her son Louis after discovering he was stealing from the hospital.

As Max prepares to return to the hospital and resume her duties, Max tells Fletch she was given a six-month suspended sentence and a big fine, which is added to her debt problems.

Fletch’s daughter Evie is back on-screens next week and she is about to head straight into Kian’s drama.

She arrives at the hospital for a job interview, but could find her herself caught up with Andrei during a chance meeting in Pulses.

Having failed to back the nurses in a recent protest, Jeni struggles to make friends on the ward.

Luckily she has Fletch’s support and sparks continue to fly between them.

They soon bond over their teenage daughters and soon Fletch is asking Jeni out for a drink.

Could this be the start of a new romance for Fletch?

Jeong is thrown into the limelight

Jeong struggles to get to the bottom of a patients troubling symptoms. He’s soon thrust into the limelight and he must diagnose the mystery condition.

But will Dom help?

Dom is still coming to terms with everything that’s happened and is recovering in Holby.

But he has no sympathy from Ange, who is furious at his recklessness.

She insists he only has himself to blame for his latest predicament and implores him to get his act together.

As he begins to reflect on everything that’s happened over the last few months, he decides to apply for the consultant post.