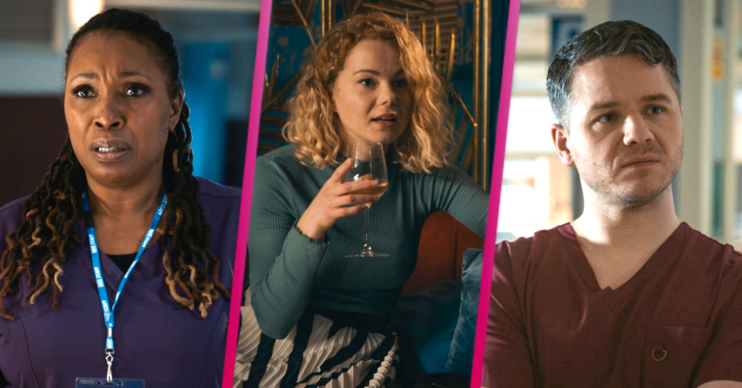 Meanwhile Kian tries to track down Andrei and Dom makes the ultimate betrayal.

Max continues to bury her head in the sand about the BRCA1 diagnosis, leaving Louis worried about his mum.

When he learns that Max lied about making an appointment with the consultant, Louis urges her to stop running away from her problems.

Louis soon bears the brunt of Max’s fears and she faces her inner turmoil.

Max struggles to decide whether to have the life-saving surgery. But soon she is reunited with an old flame.

Max is delighted to see Treve at the hospital. The pair immediately reconnect over old times.

But what brings him to Holby?

After an overwhelming day, recovering alcoholic Max is tempted by booze until she comes to her senses.

She goes to meet Treve instead. She acknowledges she needs to face up to the diagnoses.

Max tells Treve she will have the surgery, but on the condition that he performs it.

He realises Evie may be useful and starts pressing her for information on his whereabouts.

But Evie’s new friendship leaves her dad, Fletch, horrified. He warns Kian to keep Evie out of it.

Will Kian betray Fletch to get what he wants?

When Ange becomes jealous of Josh’s flirtations with other women. Josh takes the opportunity to question the status of their illicit romance.

Ange isn’t sure about making things exclusive, so Josh takes matters into his own hands.

He soon gate crashes Ange’s evening with her daughter Chloe.

But when Ange is called away, Josh faces temptation from a tipsy Chloe when she invites him back.

Will he stay faithful to Ange or is there about to be a complicated love triangle?

As Dom prepares to step up to consultant level, he spots an opportunity to get Sacha out of his path.

Soon Dom tells Hanssen that Sacha performed an illegal stoma reversal on him, which Ange was a witness to.

Both Ange and Sacha are left reeling from Dom’s betrayal. Will they lose their jobs?

Horrified by Dom’s actions, Sacha quickly realises that this was his revenge plan all along.

As Hanssen conducts an investigation, Dom throws Josh and Jeong under the bus.

Knowing he can’t allow the F1’s to be punished over this, Sacha makes the ultimate sacrifice and tells Hanssen he acted alone.

Sacha is told to pack up and leave – but will Dom stand by and watch his friend lose everything.

Will he regret what he’s done?