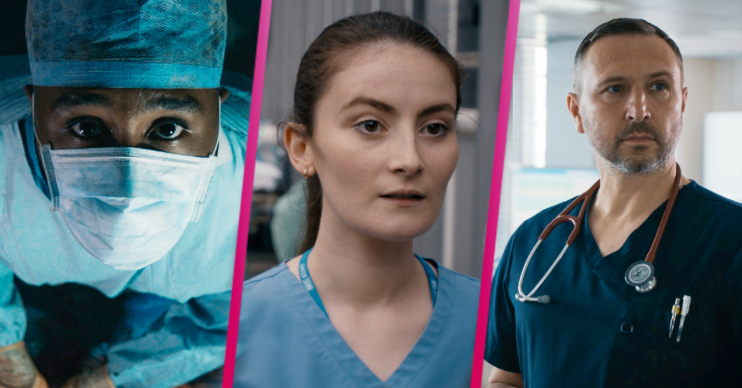 It's the aftermath of the explosion

Holby City spoilers for tonight reveal Hanssen and Ange’s lives are both in danger.

Meanwhile Fletch makes a shocking discovery and Louis makes a declaration to Kylie.

Hanssen find himself injured and lying lifeless on the ward as chaos surrounds him.

Meanwhile pregnant Ange‘s life is in the hands of her boyfriend Josh and daughter Chloe.

The power is out and they quickly realise they need to deliver the babies.

Chloe quickly springs into action – but can they save Ange as well?

This week’s episode marks the end of her time at Holby for Chloe as actress Annie Lennox will be leaving the role.

However details of Chloe’s exit are being kept under wraps.

In tonight’s episode fans will learn who will meet their grisly end.

Fletch finally gets an insight into what’s been going on.

While the news of Lucky’s predicament leaves her colleagues shocked, Jeni puts on her best poker face as she continues her scheme.

However Fletch soon makes a horrifying discovery which makes his blood turn cold.

Is the truth about to come out?

Kylie and Dom aren’t put off by the danger at the hospital when they suspect an elderly patient may be in danger.

Louis worries about Kylie as she and Dom risk their own welfare to help.

Soon Louis makes a surprising declaration to Kylie, but what is it?

Holby City continues tonight (September 14) at 7.50pm on BBC One.