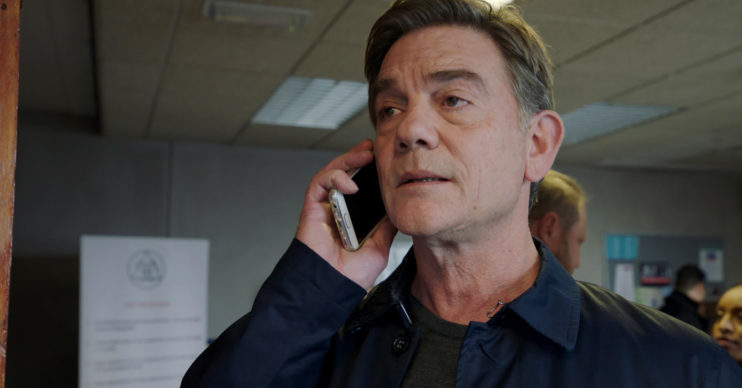 Ric is immediately suspicious of Guy

In next week’s Holby City, Guy Self comes back to the hospital. But is he hiding something?

After six weeks off air, the BBC medical drama finally returns to screens, bringing along a familiar face.

Guy heads back to Holby with a former patient called Alan Locke, who is desperate for Max to operate on him.

However Guy is keen to try and keep his relationship with Max quiet and goes to desperate lengths to do so.

But it’s not long before Ric starts to get suspicious. Is the game already up?

After realising Max and Guy already know each other, he pulls Max aside and informs her on Guy’s past at the hospital and tells her about his drinking problem.

But he has no idea that Max already knows about Guy’s history.

Ric goes a step further and fills her in on Alan’s medical history and hints his current problems could be to do with Guy’s questionable surgery.

How will Max react?

What else happens in the Holby City episode?

In the upcoming episode, viewers will also see the aftermath of Xavier Duvall’s death.

Zav’s on-off girlfriend Donna struggles to cope with him being gone. The ordeal is made even more difficult by the fact she isn’t allowed to attend his funeral!

Donna struggles to hold her emotions together, despite trying to continue on as normal.

But her facade slips when Jason asks her to sign a memorial book for his pal.

Jason is also struggling with Zav’s death but he is more keen to talk about how he feels.

When the tribute book doesn’t go to plan, Jason comes up with another way to honour the doctor’s memory.

Will time will Holby City be on?

Holby City will air at 8pm on BBC One on Tuesday June 2. Episodes will continue to air every Tuesday as normal.

Are you excited for Holby City’s return? Visit our Facebook Page @EntertainmentDailyFix and let us know what you think.