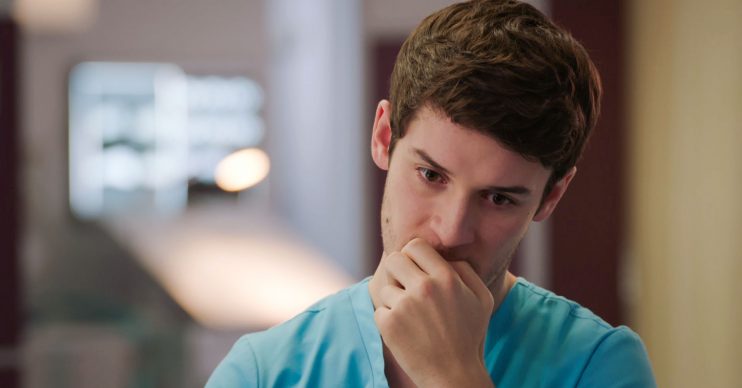 Holby City SPOILERS: Cameron sinks to new lows to get to Zav

Zav has been suspicious about Cameron's behaviour for a while

The heat is well and truly on Cameron in next week’s Holby City as fellow medic Xavier comes closer to unveiling his dark secrets.

Viewers already know that a few months ago junior doctor Cameron failed to help rapist Evan as he lay dying in his hospital bed.

Cameron even made sure no other member of staff could come to Evan’s aid, secretly allowing him to die.

Over the last few weeks, Zav has become increasingly suspicious of the junior doctor and on Tuesday (March 17) he starts piecing together the puzzle of Evan’s death and becomes dangerously close to exposing the truth.

Wondering why Cameron is so on edge about the investigation into Evan’s death, Zav does some digging.

Later Cameron ends up tripping over his web of lies, but when Zav thinks he’s got him, Cameron hits back…

Cameron goes to disturbing lengths and plays a cruel trick on his co-worker in surgery before publicly challenging Zav’s state of mind in front of everyone on the ward.

After getting personal with Zav over his mum’s mental health issues, Cameron causes trouble in his relationship with Donna.

Not only does Max suspend Zav but Donna gives him a dressing down about his behaviour.

Hurt that Donna seems to believe Cameron over him, Zav insists he doesn’t know where this leaves their relationship long term.

There will also be a specially dropped scene in next week’s episode too.

Meanwhile, it has been revealed that there will be a scene relating to the coronavirus pandemic.

A Holby City rep told ED!: “There was a brief mention of it in this week’s episode where Max said she needed to brief the staff on the ever changing coronavirus situation.

“There will also be a specially dropped scene in next week’s episode too.”

Last week fans were left impressed as the medical drama inserted a Coronavirus reference into the show.

At the time of writing, there are 798 cases and have been 10 deaths from Coronavirus in the UK.

It was recently revealed that Coronation Street and Emmerdale have cancelled set tours of fears of the virus.

Have you been taking precautions with the coronavirus pandemic?

Holby City is on Tuesdays at 8pm on BBC One.

Will you be watching Holby City next week? Leave us a comment on our Facebook page @EntertainmentDailyFix and let us know what you think!