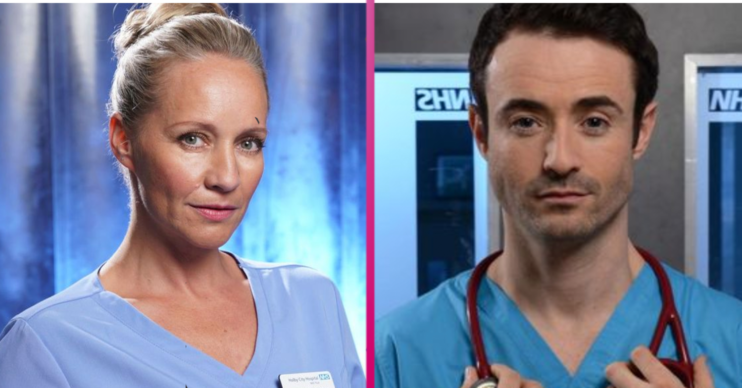 Former Holby City favourite Joe McFadden is set to return as Dr. Raf Di Lucca in a special episode of the medical drama.

Raf was of course killed off back in 2017 after being shot.

But he will make a one-off appearance in an episode that will air later this month.

How does Joe McFadden return to Holby City?

It won’t be a Dallas-style return from the grave though. He will ‘appear’ to his widow Essie, as she struggles to deal with her cancer diagnosis.

Earlier this year, Essie discovered that her cancer had returned. And she has recently learned that her chemo treatment isn’t effective.

As she tries to come to terms with what’s happening to her, her late husband appears.

Actor Joe has said of his return: “I’ll always look back on my four years on Holby with such fondness. It was one of the happiest jobs I’ve done.

“And it was a real pleasure to get to wear Raf’s scrubs one last time in order to offer his wife Essie some guidance in such a touching episode.”

Last year, Joe revealed that he would like to return to the popular BBC show as a ghost!

The 44-year-old actor told Inside Soap magazine: “I pitched it to the producer that Raf could appear as a ghost and give Essie some advice, but he wasn’t having it!

“I’m happy being a good memory and Raf’s memorial was blessed by Reverend Richard Coles. He blessed it in real life as well – so I really feel as if I’m dead now!”

Speaking about Raf being killed off , Joe said: “It would have been nice to have that safety net, and perhaps I would have gone back, but I’m a great believer in closing doors firmly.

“When it was decided that my character was being killed, there was a part of me that felt relieved about it.”

Raf was shot by Fredrik Johansson, son of the CEO of Holby City Hospital.

He was left to bleed to death as none of his colleagues noticed he was missing while they dealt with another attack on Jac Naylor.

Are you excited to see Joe back as Raf? Leave us a comment on our Facebook page @EntertainmentDailyFix and let us know what you think of this story.