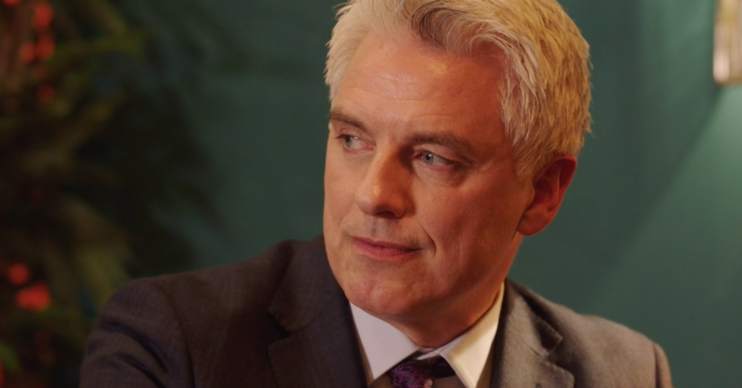 He will play a consultant looking to recruit other doctors away

The Dancing On Ice judge, Doctor Who star and former I’m A Celebrity contestant will add another credit to his CV in an upcoming episode of the BBC One drama as character Drew Nicholson-Heath.

It is thought John, 52, will play a consultant looking to recruit other doctors and medics away from the hospital.

His arrival was teased with a sneak peak of Drew in action in the Holby spring trailer, released yesterday.

It is believed John will appear in the series for only one episode, and it looks like he may be heading for a clash with Ange Godard.

Asked why he is in Holby, Drew snootily jokes: “Slumming it, I guess.”

Being part of another iconic BBC drama is just fabulous.

He is also seen eyeing Ange across a bar – is he in town to tempt her away from Holby?

Speaking out about the role, John said in a statement: “Being part of another iconic BBC drama is just fabulous.

“I was welcomed with open arms by the cast and crew and felt like part of the Holby City family right away.

“My character Drew brings a new flavour to the show and I look forward to his return soon. Surgery will never be the same again.”

And on social media, he announced: “Super excited to introduce you to someone new… His name is Drew, he’s a Surgeon he’s #Scottish and will be on your screens this Spring. @bbcholbycity @bbcone is he good or bad?? You will want to tune in to find out. Oh yeah he also drives a #fabulous car. Jb.”

Fans were quick to express on social media just how much they’re looking forward to seeing John on screen in Holby.

One person commented on Instagram: “I haven’t watched Holby City for a while, but I am going to start watching it again. I can’t wait to see you in Holby City, and I think Drew is going to be bad.”

Super excited to introduce you to someone new..His name is Drew, he’s a Surgeon he’s #Scottish and will be on your screens this Spring. @bbcholbycity @bbcone is he good or bad?? You will want to tune in to find out. Oh yeah he also drives a #fabulous car. Jb

“Wahoo gotta love a bit of @JohnBarrowman,” wrote another person on Twitter.

And someone else tweeted: “John Barrowman is an interesting casting choice so I am looking forward to seeing how he fits in.”

Holby fans will also no doubt be pleased to see actor John Michie reprise his role as Guy Self, also spied in the trailer.

However, it seems the consultant neurosurgeon – last seen on the show in November 2018 – may return with a few shocks after Guy was seen discussing matters with another character in a conspiratorial manner.

“Kestrel will provide an excellent service,” Guy says mysteriously in the trailer, as the other character mentions the opportunity for a “rocketing share price”.

A voiceover by Guy also notes, as the medic looks to the skies: “I’m not the same man I used to be when I last worked here.”

Holby City airs on BBC One, Tuesdays at 8pm.