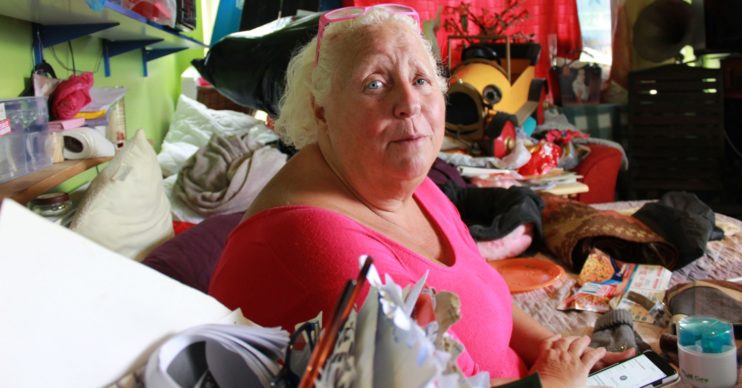 Hoarder Homes on Channel 5: Why do people hoard? Is it a mental illness?

A new Channel 5 documentary series introduces viewers to people whose lives have been affected by the compulsion to hoard – but why DO people hoard?

Is it a mental illness and can it be cured?

Here’s everything you need to know about hoarders and why they do it, as well as an introduction to the new six part series on C5.

What is a hoarder?

People with hoarding disorder excessively save items that others may view as worthless.

A hoarder stores the excessive items in a chaotic manner, usually resulting in unmanageable amounts of clutter.

The items can be of little or no monetary value.

The clutter disrupts the person’s ability to use their living or work spaces.

Piled-up belongings make a house difficult to clean and often leads to uncleanliness.

Hoarding is not the same as collecting.

Potential consequences of serious hoarding include health and safety concerns, such as fire hazards, tripping hazards and health code violations.

Not to mention family conflicts, isolation and loneliness.

Why do people hoard?

Hoarders are ‘saving’ items either for the future, or because of sentimental value.

Some may also feel safer surrounded by the things they save, and find it difficult to get rid of possessions.

Experts still do not fully understand the reasons why someone begins hoarding.

It can be a symptom of another condition.

For example, someone with mobility problems may be physically unable to clear the clutter.

Or people with learning disabilities or dementia may be unable to categorise and dispose of items.

Others may be struggling to cope with a stressful life event, such as the death of a loved one.

Is hoarding a mental illness?

In some cases, hoarding is a condition in itself and often associated with self-neglect.

Hoarders are more likely to live alone, be unmarried, have had a deprived childhood, and have a family history of hoarding.

Hoarding has historically been considered a symptom of OCD.

However, recent research has shown that in most cases, hoarding appears to be independent from other neurological and psychiatric disorders.

Why do people hoard? Is there a cure for hoarding?

Hoarding disorders are challenging to treat because many people who hoard frequently do not see it as a problem.

Many hoarders are reluctant to seek help even if they realise they have a problem, because they feel extremely ashamed, humiliated or guilty.

It’s really important to encourage a person who is hoarding to seek help.

If not tackled, it’s a problem that will probably never go away.

If you suspect someone is hoarding, try to persuade them to see a GP.

Your GP may be able to refer you to your local community mental health team, which might have a therapist who’s familiar with issues such as OCD and hoarding.

If you have difficulties accessing therapy, the charity OCD-UK may be able to help.

The therapist will help the person to understand what makes it difficult to throw things away and the reasons why the clutter has built up.

Antidepressant medicines have also been shown to help some people with hoarding disorders.

Why do people hoard? How many hoarders are there in the UK?

Hoarding affects up to six per cent of the population – that is potentially over 1.2 million people in the UK alone.

When severe, it’s associated with substantial functional disability and represents a great burden for the sufferers, their families and society.

Research shows that hoarding disorder is more common in males than females.

It is also more common among older adults – three times as many adults 55 to 94 years are affected by hoarding disorder compared to adults 34 to 44 years old.

Hoarder Homes: No Room to Move on Channel 5

This six-part documentary series shines a light on the many and varied reasons why people hoard.

Professional cleaners tackle the house, along with house clearance experts.

But with rat droppings in the dining room and maggots in the master bedroom, it’s going to be their toughest assignment ever.