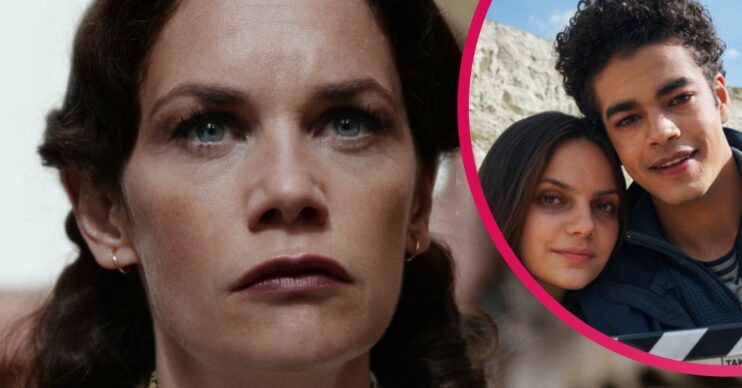 It's based on Philip Pullman's third novel The Amber Spyglass

His Dark Materials season 3 has begun filming – and fans have been given a sneak peek at what’s going on behind the scenes.

A new photo shows cast members Dafne Keen and Amir Wilson – aka Lyra and Will – posing with a clapper board.

The duo are seen announcing the good news that they’re about to start filming episode one of series three.

Here’s everything we know about His Dark Materials series three – including the new cast members!

Read more: When is His Dark Materials starring James McAvoy back on BBC One?

His Dark Materials series three has started filming, BBC One has revealed.

Production has begun on the eight-part adaptation of The Amber Spyglass.

The third season of the BAFTA-winning BBC and HBO co-production is based on Philip Pullman’s final novel in the trilogy.

His Dark Materials series three: Who’s in the cast?

This series will see Amir Wilson return as Will, the bearer of the Subtle Knife.

Meanwhile, Dafne Keen will resume her role as Lyra, the prophesied child.

Together, they travel through multiple worlds to find and protect each other.

TV viewers will recognise Adewale from The Fix, Game of Thrones and Hunted.

Jamie Ward. star of The Durrells and The Pact, joins the cast as Father Gomez.

Ama will be played by young actress Amber Fitzgerald-Woolfe.

Read more: His Dark Materials season 2: What are Daemons, Dust and Spectres?

Where is His Dark Materials series three filmed?

Production will once again take place in the sound stages at Wolf Studios Wales.

It will also be partly shot on location throughout Wales and England.

What happened at the end of series two?

At the end of season two, viewers saw Lord Asriel call upon the angels to help him wage a war against the Kingdom of Heaven.

Mrs Coulter abducted her daughter Lyra to take her to ‘safety’ in their own world.

What happens in series three?

Season three opens with Lyra unconscious, having been given a sleeping draught by her mother.

Meanwhile, Will is still carrying the Subtle Knife and continues his quest to find her.

He is tracked down by two angels – Balthamos and Baruch – who wish to take him to join Lord Asriel’s campaign against The Authority with Commander Ogunwe.

But Will is not the only one after Lyra…

Father President MacPhail continues his mission to destroy the child of the prophecy, employing the help of his most committed follower, Father Gomez.

They tell her of a cataclysmic phenomenon in their world.

His Dark Materials series three promises multiple new worlds, including the Land of the Dead.

It will also feature strange new creatures the Mulefa and Gallivespians.

The third season will bring the Philip Pullman adaptation to a dramatic conclusion.

Bad Wolf founder and Executive Producer Jane Tranter said: “This season is both an epic adventure and a story about love and truth.”

How many episodes will series three be?

His Dark Materials series three will be eight episodes.

Each episode will be around 50 minutes long like the previous two series before it.

His Dark Materials series three has only just started filming.

So we’re looking at early 2022 at the earliest for it to arrive on our screens.

His Dark Materials will air on BBC One, followed by BBC iPlayer.

His Dark Materials season two averaged over six million viewers on BBC One.

Season one and two are currently streaming now on BBC iPlayer.

His Dark Materials series three will arrive on BBC One in 2022. Series one and two are currently available to watch on iPlayer.

Are you looking forward to the return of His Dark Materials? Leave us a comment on our Facebook page @EntertainmentDailyFix.