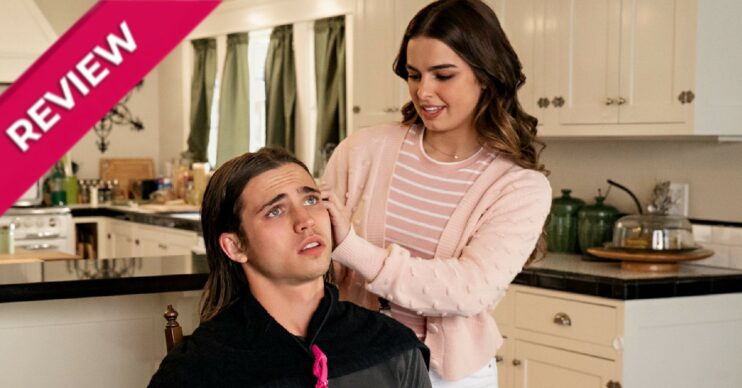 He’s All That review: Is Addison Rae’s gender-flip remake of 90s classic any good?

The 90s classic is getting a makeover

He’s All That brings She’s All That into generation TikTok with a gender-flip and a lot more social media influencing.

Addison Rae, who found fame on the video platform, leads the cast as Padgett. She’s a super cool (and secretly broke) Instagrammer famed for her lifestyle tips.

However, when her douchebag boyfriend cheats on her, and the fallout is caught live on camera for her thousands of fans, things fall apart.

With a social media brand (fronted by Kourtney Kardashian) pulling out on sponsoring her, Padgett needs to hustle to get back in their good books.

So she… makes a bet with her friend to turn the high school loser into Prom King?

It’s a bit of a tenuous thread, but it does (kiiiind of) make sense.

As someone who is a diehard lover of the original She’s All That, I joined in with most in believing the remake was unnecessary.

But, it turns out – 22 years on – the update isn’t completely off base. It’s definitely not without fault, but the result isn’t awful.

At a nice and tight hour-and-a-half, there are some cute nods to the original. For example the return of the OG makeover star, Rachael Leigh Cook, who becomes mum to Addison’s Padgett.

There’s also the beloved ‘prom dance routine for no reason’ fronted by the returning Matthew Lillard.

However, while He’s All That is definitely She’s All That, director Mark Waters brings more than a little of his previous film, Mean Girls, into the mix. Especially with its moral message of ‘life’s not all about popularity’.

As Padgett learns about life beyond being an influencer, the facade of her Insta life starts to fall. As a result, the rest of her school friend’s failings come with it.

But while that all lands well enough, unfortunately, He’s All That lets the side down with any kind of character development.

One conversation is assumed all that’s needed to understand Padgett, and Cameron, and Cameron’s sister. But the writers were wrong.

The central relationship is also something, sadly, we just don’t buy. But that’s not down to Addison or Tanner, it’s the script they’re given.

Despite how you may feel about TikToker Addison’s fast-track to fame, she isn’t a bad leading lady. Bit too smiley and plastic, maybe – but that’s also, in this case, part of the character.

We could have done without the cringe Katy Perry singalong moment though.

This may be where original evangelists may really switch off. Despite their efforts, the pair are just no Freddie Prinze Jr and Rachael Leigh Cook.

He’s All That doesn’t reinvent the wheel but it’s a nice enough modern take on the classic 90s film.

But there are definitely moments and subplots that could have done with some fine-tuning. Most prominently, the central characters – there just wasn’t enough care taken there.

However, it’s not the absolute train wreck most assumed it would be. It’s a simple, easy watch.

And now Kiss Me is back in our heads for another 20 years.

He’s All That launches August 27th on Netflix.