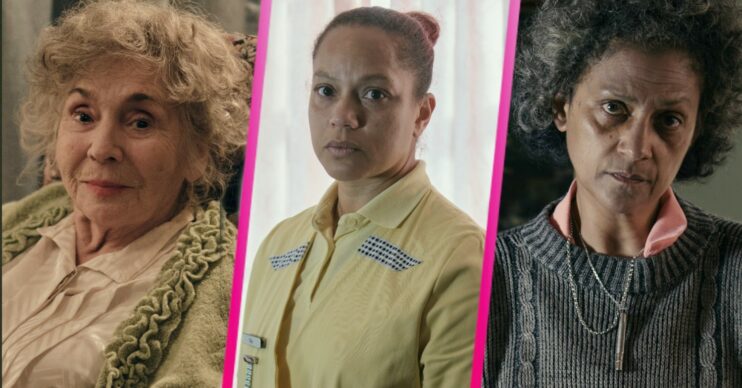 Help on Channel 4: A truly stellar cast alongside Jodie Comer and Stephen Graham

The cream of British acting talent

Yes, it’s dark and devastatingly sad at times, but it’s also full of joy as it focuses on the relationship between carer Sarah and her patients.

Stephen Graham stars as Alzheimer’s sufferer Tony alongside a cast of some of UK’s finest.

Tony is by far the youngest resident in the Liverpool care home as a result of his early on-set Alzheimer’s diagnosis.

The character of Tony is only 47 and his condition causes periods of confusion and violent outbursts.

There are heartbreaking scenes when he remembers his beloved mother is dead.

TV viewers will recognise Stephen Graham from The North Water, Line of Duty, Time, The Virtues and This is England.

Jodie Comer, 28, portrays Sarah, a new care worker who has her work cut out for her.

Her already difficult job of caring for the patients is made hellishly worse by the Covid-19 pandemic.

Sarah is pushed to breaking point as the care home appears to be abandoned and residents begin to lose their lives.

Jodie is best known for her roles in Killing Eve, Doctor Foster and My Fat Mad Diary.

Once an English teacher, she moves into the care home when her family can longer look after her.

She helps entertain her fellow residents and friends by reciting passages from literature.

Cathy, 56, is probably best known for her role in the 1986 film Mona Lisa, which also earned her Best Supporting Actress nominations at the Golden Globes and BAFTA Awards.

She has also starred in Priest, Band of Gold and, more recently, Whitstable Pearl and McDonald & Dodds.

Tori is a worker in the care home, and isn’t afraid to speak her mind when things go pear shaped.

She is Sarah’s support after she endures a devastating shift that leaves her broken.

Most recently, she has appeared as Anna in Ibiza-based drama White Lines, and Susie Daniels in Dun Breedin’.

Gloria is a long-standing resident in the Liverpool care home, who is sadly hit full-on by the pandemic.

Sue, 77, is adored for her role as Barbara Royle in The Royle Family.

She is also best known for Waking the Dead, Brookside and Coronation Street.

Gaynor is the concerned mum of Jodie Comer’s character Sarah.

Gaynor can see that Sarah’s job is taking its toll, and encourages her to leave the care home.

Lesley recently starred as Hannah Laing in Before We Die, but is probably best known for playing DC Janet Scott in Scott & Bailey opposite Suranne Jones.

She has also appeared in Clocking Off, Playing the Field and The Shadow Line.

Steve has the difficult job of managing the care home – but lets his staff down when they need him.

His most notable roles are probably Professor Quirrell in Harry Potter and the Philosopher’s Stone, Father Beocca in The Last Kingdom and Michael Ryan in Tin Star.

He also played Kester Gill in the E4 series My Mad Fat Diary – which also starred Jodie Comer – and Thomas Blanky in The Terror.

As well as the aforementioned cast of absolute gold, there are many other cast members viewers will recognise.

What is Help about?

Help is an emotional drama set in a fictional care home in Liverpool.

It tells the moving story of young care home worker Sarah who finds her calling working with the residents.

However, she is challenged to breaking point during the coronavirus pandemic in the spring of 2020.

She must protect those in her care – including Alzheimer’s patient Tony who she bonds with straight away.

It’s life affirming, but also casts a critical eye on the lack of information – and resources – care homes were given at the beginning of the pandemic.

It delivers with a killer punch.