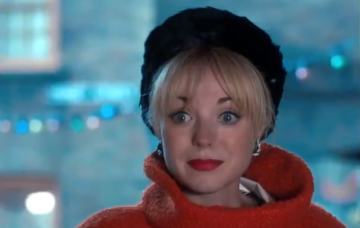 The Christmas special will have us all blubbing

Call The Midwife star Helen George has admitted she finds it difficult to watch herself on television.

The popular BBC period drama is returning for a Christmas special which Helen – who plays Nurse Trixie Franklin – warned will be a “cry-fest”.

Series eight will arrive next year, bringing new cast members including Harry Potter star Miriam Margolyes, who will debut in the festive episode.

While millions of viewers are expected to tune in to Call The Midwife when it airs on Christmas Day, George, who has starred in the show since it began in 2012, revealed she tries to avoid watching herself on TV.

She said: “I’m not good at watching myself; I tend to try and do washing up and come back in for other people’s scenes – I like watching everybody else’s work.

“But my own stuff… I find it stressful, because it’s six months of our lives and it’s stressful seeing it on screen and thinking ‘God I shouldn’t have done that’ or ‘Why is my fringe doing that?’.”

Helen, 34, took a break from filming to give birth to daughter Wren Ivy in September 2017.

She said she missed her cast-mates while she was away and that when she returned to the set to play a midwife she felt “a bit more motherly”.

Wren Ivy, Helen’s daughter with her Call The Midwife co-star Jack Ashton, has already been on set but she would prefer her to become a lawyer or doctor rather than pursue a career in acting.

And Helen said she was “lucky” to be able to juggle raising a child with working.

She said: “It’s definitely hard watching that on a big screen and realising how big my bags are this year.

“It’s hard being a working mum, but it’s good at the same time. I’m lucky to be able to do it.”

She said: “I always find no matter how many times I’ve seen it – I know all the stuff that goes into a birth scene – but every time a baby is born on screen, I cry.

“Every time. I don’t know what it is, it’s something about the lifting up … I don’t know, it is really moving.”

The show will return for its eighth series in the new year, when the nurses at Nonnatus House will be grappling with the issues of the 1960s.

Call The Midwife is on Christmas Day at 7.45pm on BBC One.

Will you be tuning in? Leave us a comment on our Facebook page @EntertainmentDailyFix and let us know what you think of this story.