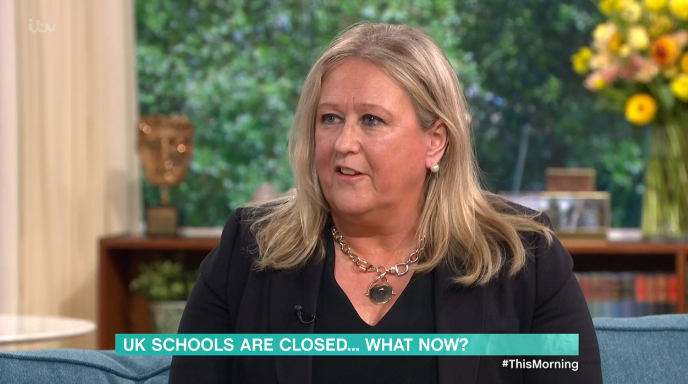 Schools across Britain will close from Friday until further notice

A headteacher has expressed her worries for children after it was confirmed UK schools will shut amid the coronavirus pandemic.

Prime Minister Boris Johnson said on Wednesday, March 19, that all schools across Britain will close from Friday, March 20, until further notice.

It was also confirmed that schools will shut except for looking after the children of keyworkers and vulnerable children.

Headteacher of the Licenced Victuallers’ School Christine Cunniffe has said she’s worried about vulnerable children as schools could potentially close for months.

She said on Thursday’s This Morning (March 19): “I think it was a good move by Government to keep the schools open for as long as possible because we do need some normality for the children.

The mental health of our children has got to be our number one priority.

“But obviously there comes a time when the government have to make a call and they’ve made that call and it’s a good one.”

She continued: “We’ve got to keep going as normal and we’ve got to support the country through a really hard time now, especially those keyworkers who are going to need us in schools to keep normality.

“I am worried that children who are less fortunate and vulnerable need to be looked after and this has got to be an immediate special consideration to support those children at this time.”

Going on to discuss children’s mental health, Christine said: “The mental health of our children has got to be our number one priority.

“The best thing you can do is go outside for a walk [but not with friends] – it resets the mind, get outside!”

It was also recently confirmed that GCSEs and A-levels in both England and Wales will be cancelled.

However, the Prime Minister said there are plans for students to still receive qualifications.

It’s not been confirmed whether exams will go ahead in Scotland but schools in Northern Ireland will shut and it is expected pupils will not sit summer exams.

Meanwhile, universities have called for clarity on the implications of cancelling exams.

Alistair Jarvis, chief executive of Universities UK, said: “Students should not lose out on the opportunity to go on to university this year because of the challenges posed by the pandemic.

“We are committed to working closely with the government, UCAS, examination regulators and school leaders on the practical implications of this and hope there will be clarity on this for students, parents, teachers and university admissions staff as soon as possible.”

Are you worried about your children amid schools shutting down? Leave us a comment on our Facebook page @EntertainmentDailyFix.