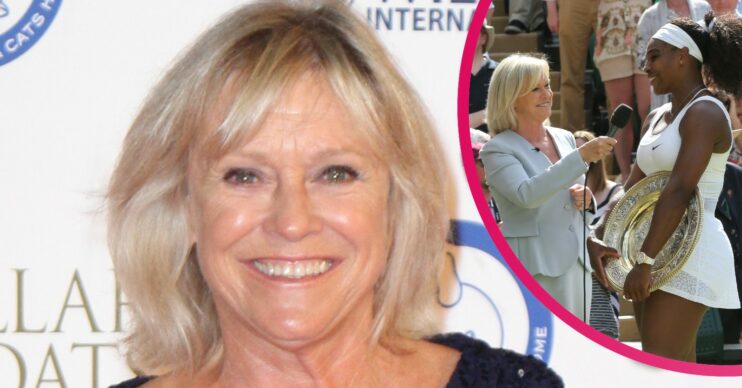 Has Sue Barker ever won Wimbledon and why did she leave A Question of Sport?

All about the icon that is Sue!

Unceremoniously axed from A Question of Sport this year, Sue is still commentating for the BBC during Wimbledon 2021.

Read more: When is Wimbledon 2021? Who are the commentators?

So how old is Sue now? Did she win Wimbledon? And is it true she once dated Sir Cliff Richard?

We answer these questions and more below….

How old is Sue Barker?

Has Sue Barker even won Wimbledon?

Sue has not won Wimbledon. However, during her illustrious tennis career she won the Grand Slam singles title at the 1976 French Open.

Read more: Is Alex Scott replacing Sue Barker on A Question of Sport?

Once ranked number three in the world amongst tennis singles, she is one of the UK’s best British tennis players ever.

Why did Sue Barker leave A Question of Sport?

Sue Barker was axed rather than left A Question of Sport.

In September 2020 it was announced that she would be leaving the show after 24 years.

However, it was the BBC’s decision and not theirs.

Each expressed their disappointment in the news.

With Sue said at the time: “I’ve absolutely loved my 24 years fronting A Question of Sport, it’s been my dream job.

At the time the BBC released the following statement: “We would like to thank Sue for her enormous contribution as the show’s longest reigning host over the last 24 years, and Matt and Phil for their excellent team captaincy.”

“Together they have ensured A Question of Sport remains a firm favourite with the BBC One audience.”

Who is Sue married to?

Sue has been married to landscape gardener and former policeman Lance Tankard since 1988.

They first met when she was working as a tennis coach in Portugal and Lance was on holiday.

Lance has always stayed out of the limelight and when Sue isn’t working she enjoys a quiet life with him in the country.

Sue and Sir Cliff Richard briefly dated in 1982. Cliff even flew to Denmark to watch her play tennis.

The media made a big thing about it at the time, but it fizzled out within months.

Cliff has gone on to say that he did love Sue but just not enough to want to marry her.

In one interview he said: “I seriously contemplated asking her to marry me, but in the end I realised that I didn’t love her quite enough to commit the rest of my life to her.”

Does Sue Barker have any children?

Sue doesn’t have any children. Sue and Lance live in the Cotswolds where they have several rescued dogs.