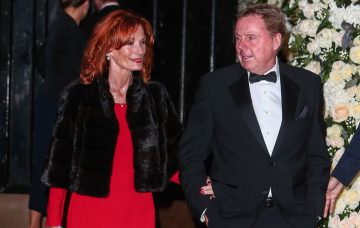 Her sister passed away 10 years ago

Harry Redknapp and his wife Sandra’s love story won over the nation’s hearts on this year’s I’m A Celebrity, but it’s been revealed that behind closed doors Sandra has suffered a decade of heartache.

In 2008, Sandra lost her twin sister Patricia when she died just days after being admitted to hospital with severe pneumonia. She was 58.

Harry told The Sun: “Pat had never had a day’s illness then suddenly with three or four days we lost her.

“Sandra and her were so close, it was crazy – they were always on the phone for hours every day.”

Sandra supported Patricia’s son, professional footballer Frank Lampard, as he struggled with his loss and was a particular support for him when he married Christine Bleakley in 2015.

The couple paid their respects to Frank’s mum by naming their first daughter Patricia after her when she was born in September.

Harry won over viewers when he talked of his love for Sandra, who he met when they were both 17, especially when he burst into tears and told her he loved her when she made a surprise visit in the jungle.

Sandra was very forgiving when Harry famously ran her over in 2016.

He confessed to The Sun: “Even when she was laying with a broken ankle in the road she was just unbelievable, she didn’t scream.”

The newly crowned King of the Jungle also revealed that Sandra has always gone to extreme lengths to keep their life stress-free during their 51-year marriage.

He explained: “She once fell over the Henry Hoover and broke her kneecap when I was managing in London.

“She crawled up the stairs at 9pm and got into bed, took a paracetamol and next day she woke up in agony, but she didn’t want to disturb anybody.”

Who would you like to see head to the jungle next year? Leave us a comment on our Facebook page @EntertainmentDailyFix and let us know what you think!