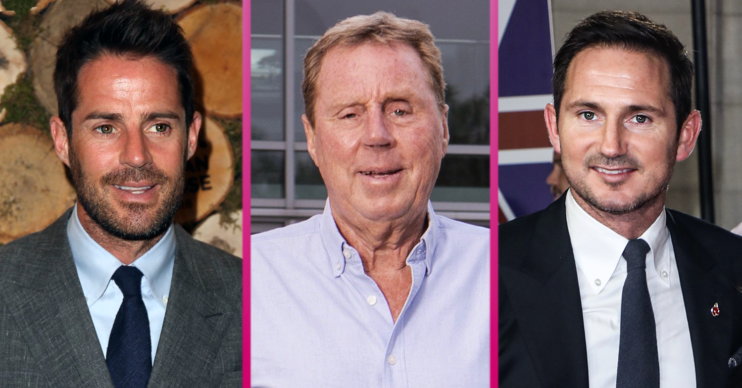 Harry Redknapp is a living legend.

The football icon and West Hame star did the unthinkable by managing rival teams Portsmouth and Southampton.

Impressively, he is also the last English manager to ever win a major English trophy.

But did you know the Harry’s Heroes star also has a pretty impressive family tree?

Harry, 73, and Sandra, 71, have been married for an incredible 54 years and have two sons, Jamie and Mark.

The couple met when they were just 17 at a local pub and were obsessed with each other from day one.

So much so, that while Harry was playing professional football in the 60s, Sandra stormed the pitch just to hug him.

Jamie posted footage of the adorable moment while his dad was on I’m A Celebrity last year.

He captioned the video: “Sandra just couldn’t keep her hands off Harry even in the early days!

“I’m pleased to say she improved her running action.”

Footballer Jamie owes his amazing career to his famous dad.

The now retired player started out at his father’s club Bournemouth when he was 16.

During an interview with the Independent, he said it meant the world to have his father’s guidance and support.

He said: “I would always look up to him at half-time, and if I had done well, he would give me a little thumbs up.

“If I hadn’t, he would give me a little sign to work harder. I was really lucky to have him.”

Jamie was then signed to Liverpool for £350,000 and played for the team for 11 years before being signed by Tottenham.

In 1998, he married pop star Louise and the couple have two sons but the couple divorced in 2017 after 19 years of marriage.

Following his retirement from football, Jamie works as a Sky Sports pundit and a team captain on A League of their Own alongside pal James Corden.

Pop star Louise is the mother of Harry’s two grandsons Charley and Beau.

She and Jamie name their second son Beau in honour of Harry, who grew up in Bow, east London.

The couple sadly called time on their marriage after she took part in Strictly Come Dancing – an experience she said made her revaluate her life.

During an interview, the singer admitted she felt like a “Stepford Wife” after giving up her career to be a stay at home mum.

Louise and Jamie then grew apart with the footballer eventually moving out.

Reports surfaced last year that the former couple had grown close again but they are not back together.

Despite their split, Louise still had a close relationship with both Harry and Sandra.

“I have no problems with Lou. Sandra [his wife] loves her and Sandra speaks to her mum all the time.”

The 50-year-old, who used to work as a model, lives in a lavish £2 million mansion in Poole.

During his teenage years, Mark also hoped to become a professional footballer like his famous dad.

In fact, Harry even signed to play at Bournemouth.

Sadly though, that dream was shattered when he suffered a bad ankle injury.

“He did go back and play non-league football, but he couldn’t walk for days after a game,” Harry told the Guardian. “He was just unlucky, you know.”

Mark is married to his wife of 12 years Lucy.

The couple have three children together.

Harry is the uncle of Frank Lampard (who is married to TV presenter Chirstine Bleakley).

The former Chelsea star’s mum Pat, who sadly died in 2008, is Sandra’s sister.

Growing up, Frank, his dad, Harry, Jamie and Mark would play football together in his grandparents’ back garden.

Jamie was signed up to play professional football before his younger cousin.

Frank remembers looking up to him and wanting to follow in his footsteps.

“When I was a kid, the kickabouts in the back garden were amazing,” he told The Sun.

“There was my dad and Harry, who had been pros and were managers, and then there was Jamie, who is older than me and was an established player at Liverpool.

“I used to idolise Jamie, and I knew how lucky I was to kick a ball with him. I used to see him as the pin-up boy of English football, he had made it, and I thought, ‘That’s what I want, too’.”

The cousins played for England together for the first time in 1999 against Belgium.

Both sets of parents were proudly cheering on their sons.

From 1994 to 2001, he was the assistant manager of West Ham under his brother-in-law Harry Redknapp.