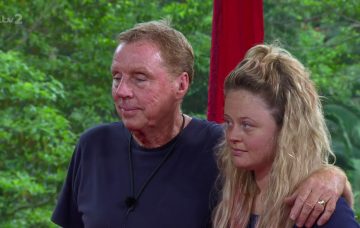 Harry Redknapp has said his I’m A Celebrity… Get Me Out Of Here! co-star Emily Atack may be too much of a catch for his son Jamie.

The football boss, who was crowned the King of the Jungle on Sunday, previously said that when he first saw the actress in the jungle, he thought she had “no chance” as a prospective date for his son, who recently divorced wife Louise Redknapp.

But in scenes that will air in Wednesday’s follow-up programme, Harry appears to have had a change of heart.

As Harry, 71, greets his former campmates in the I’m A Celebrity Coming Out Show, he says: “All you girls, how you’ve scrubbed up! I don’t even recognise you.”

Inbetweeners star Emily, 28, who has joked about dating the ex-footballer, 45, asks: “Do you think Jamie will go out with me now?”

Harry replies: “I don’t think he could pull you, I’ll be honest with you!”

He told ITV’s Good Morning Britain earlier this week: “I’ll be honest – when I saw her in the jungle I thought, ‘no chance’, but I’ve seen her today when she scrubbed up and she looks all right.

“She looks good but when I saw her in the jungle I thought, ‘no, you ain’t got a prayer’. Today she looked fantastic.”

The programme sees the 11 campmates reuniting for the first time following their experience, as well as showing footage of their first moments after leaving the jungle.

Redknapp tells his former co-stars: “It’s been tough but it’s been fun as well. I’ve never laughed so much in my life. It was a great adventure.

Want to see what our Celebrities have been up to since leaving the Jungle? Good news – we’re back on @ITV and @wearestv tonight at 9pm to follow their adventures! #ImACeleb pic.twitter.com/yqQNhMkCT0

“You only live once, you’ve got to make every day count and I’ve had a real adventure. I’m glad I made a few people laugh.”

Redknapp won the series, with Atack in second place and actor and entertainer John Barrowman in third.

I’m A Celebrity… Get Me Out Of Here! Coming Out Show airs at 9pm on Wednesday on ITV.

Do you think Emily is out of Jamie’s league? Leave us a comment on our Facebook page @EntertainmentDailyFix and let us know what you think!