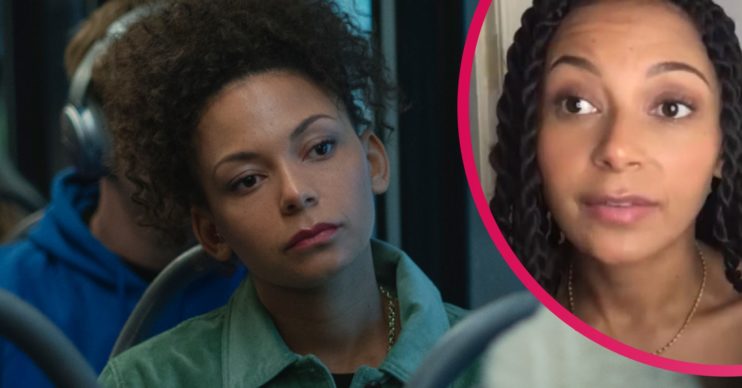 Hannah in The One: Who is actress Lois Chimimba? What else has she been in?

Lois Chimimba, Hannah in The One on Netflix, might be a familiar face to BBC viewers.

The star of the streaming platform‘s new sci-fi drama has only been acting for a few years, but she’s already featured in a number of well-known TV shows.

Read on to find out more about the star and her TV career to date.

Who is Lois Chimimba, who plays Hannah in The One?

Lois is an actress from Scotland. Born in Glasgow to a Scottish mother and Malawian father, she lived in Africa until she was two and a half, then returned to the UK.

Read more: Marriage or Mortgage: New on Netflix and you NEED to watch it!

Originally, she wanted to be a pop singer. But she gave that up to become an actress instead, studying at the Lynne Miller Academy in Glasgow before moving south for a place at London’s Mountview Academy.

What else has she been in? Her career and BAFTA nomination

Her first role was in Holby City in 2014, when she played a character called Beth Forbes.

She would return to Wyverne’s Holby City Hospital six years later for a part in Casualty. She was Aideen McFarlen in an episode of season 34, aired last year.

Acting has been my big focus from a young age and it probably always will be.

Lois was also in Doctor Who, playing Mabli in the episode The Tsuranga Conundrum, when actress Jodie Whittaker was the Doctor.

There’s another drama series that Lois and Jodie have both been in. Lois was Karen in the first series of Trust Me alongside Jodie’s character, Ally.

Last year, she received a BAFTA Scotland Award nomination for Best Actress, for her role in a TV series called Group.

Lois previously spoke about her family’s pride over her acting roles.

Read more: Behind Her Eyes reviews: What the critics are saying about the new Netflix thriller

Speaking to The Scotsman in 2015, she said: “[Today] pretty much anything that I’m going to be in, the whole street will know. My gran will go to the bowling club, so they’ll all know. And my cousins Facebook it everywhere!”

She also told the publication, of her attitude to her acting career: “I’m a big believer in positive thinking and I feel so much more secure now, like I can take a few more risks in going travelling and not worry about the audition of a lifetime passing me by. But acting has been my big focus from a young age and it probably always will be.”

In The One, Jodie plays a character called Hannah.

A multi-million pound company, MatchDNA has the technology to pair people up with their perfect partner – ‘the one’ – by analysing their DNA.

Hannah worries her husband Mark might submit his own DNA to the dating company and leave her for someone else.

Drama Netflix The One