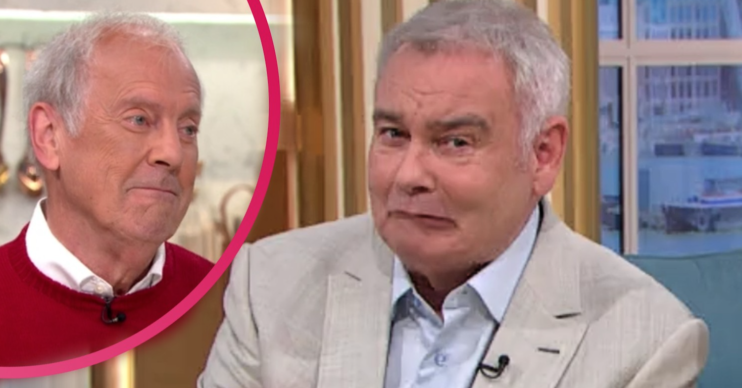 Celebrity Gogglebox star Gyles – a regular on This Morning – poked fun at Eamonn and Ruth on this morning’s episode (Friday July 16).

And it wasn’t long until he had the presenters and the crew in hysterics with his cheeky comment.

What happened with Gyles and Eamonn on This Morning?

Gyles, 73, made the comment after Eamonn made a gaffe during a topical discussion segment.

“I’m getting carried away with you and Sheila Hancock on that canal boat on Channel 5,” Eamonn said.

Read more: How long are Eamonn Holmes and Ruth Langsford hosting This Morning?

“It’s actually Channel 4,” Gyles corrected and added, “ask your carer to use the thing, it’s called a channel-changer.

“It’s just before Gogglebox, on which you also feature.”

The jokes weren’t over just yet

But Gyles wasn’t finished with the ribbing just yet.

“Have you told him he’s on it?” he turned to Ruth and asked.

Ruth laughed and was in on the joke as she shouted to her husband: “You’re on it, dear!”

However, there was time for one more dig from Gyles.

The trio were discussing the Covid situation, and Gyles said: “Can I just say, I think I’ve got to start pinging you because I think you’ve got to start spending more time at home.

“Have you done the quiz on him? I think, as his carer, he’d find it quite entertaining in the morning.

“HELLO EAMONN, I’VE GOT A NICE QUIZ FOR YOU TODAY,” he mock-shouted.

How did Eamonn address fans earlier in the day?

Earlier on in the day, Eamonn recorded a video for fans on Instagram.

Sitting in the back of his car on the way to the This Morning studio, he praised the beautiful weather and wished fans a happy Friday.

Read more: This Morning host Eamonn Holmes hits back at complaint over political ‘practice’ on show

He also thanked viewers for giving he and Ruth a warm welcome back to the show and said the first week had been a “pleasure”.