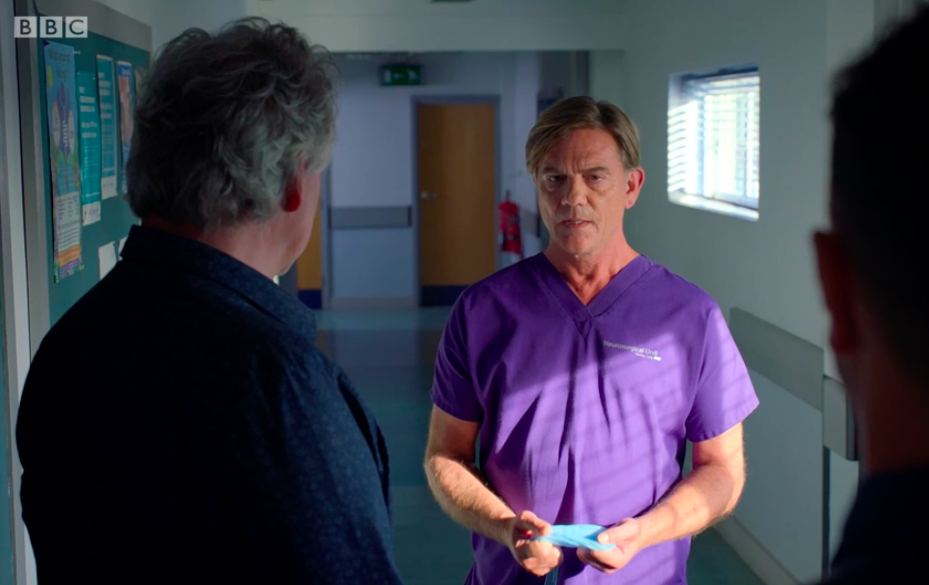 The actor John Michie returned for one episode...

Holby City fans must have been rushing to check their calendars last night as all their Christmases seemed to come at once!

In very tense scenes aired on Tuesday (20 November), three fan favourites returned – one from the brink of death (Jac Naylor) and two from extended breaks away from the hospital (Guy Self and Mo Effanga).

In the dramatic episode, Fletch and Sasha raced to save the live of Cardiothoracic Consultant Surgeon Jac, who was in mortal danger after falling victim to Professor John Gaskell’s experimental tests.

So when Guy and Mo returned to save the day, Holby fans had every right to celebrate!

Using a hell of a lot of complicated and serious-sounding language, Guy arrived in Holby with a plan to save Jac’s life.

And, after hours of surgery – coupled with the discovery of Gaskell’s notes on how to combat the poison he’d given to Jac – the hero without a cape succeeded in saving her life!

Fans went wild at his return – and the awakening of Jac.

One fan trilled: “Who else is happy to see Guy Self?”

A third said: “Could not be happier that Guy is back #HolbyCity. Always thinking of John and his family though.”

“Really good so glad Mo and Guy are back, hope they are in it for a long time,” beamed another.

Good to see Guy Self back. #holbycity

Really good so glad Mo and Guy are back, hope they are in it for a long time

Fans were beyond happy that Jac was eventually saved by the expert surgeon, with one simply crying: “Jac is alive!”

A third added: “So happy Jac is awake and has been reunited with Mo  #dreamteam #holbycity.”

Meanwhile, Henrik Hanssen battled with his conscience as he revisited the scene of Gaskell’s death, whose corpse was later found by police…

It’s unclear whether John Michie’s character Guy will return to Holby in the future but, for now, he returned just for this one episode.

It’s the first time the actor has returned to the BBC medical drama since the death of his daughter last year.

John, 62, had taken time away from Holby City following the death of his daughter Louella Fletcher-Michie.

Louella, who was 25 years old, was tragically found dead at last year’s Bestival music festival in the early morning hours of 11 September, 2017.

His appearance in Holby was the first return to acting since the tragedy.

This month, John told his 9,780 Instagram followers that he’d been “nervous” about returning.

Sharing a picture of himself in scrubs on-set, he wrote: “Risky operation tomorrow.”

When someone joked that he looked “evil”, he replied: “Just nervous!”

Would you like to see Guy Self return permanently to Holby? Leave us a comment on our Facebook page @EntertainmentDailyFix and let us know what you think!