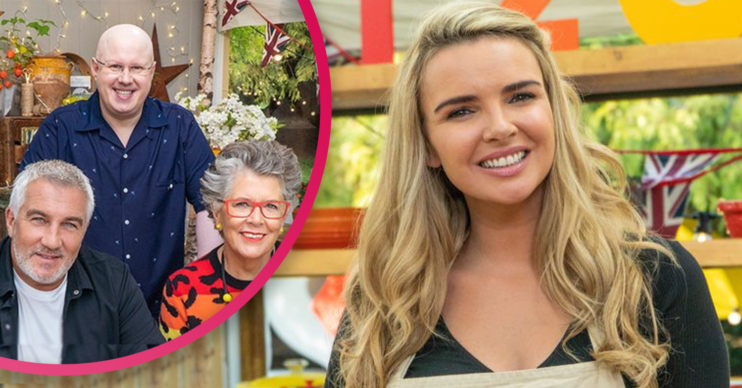 It's in aid of Stand Up To Cancer

Fans of the Great Celebrity Bake Off are thrilled to discover an I’m A Celebrity favourite is joining the line-up next week.

Girls Aloud star Nadine Coyle is set to don her apron and do battle for Star Baker alongside Ade Adepitan, Anneka Rice and John Bishop.

However, if a preview clip of the episode is anything to go by, Nadine will have her work cut out if she wants a Hollywood handshake.

What happens in the Great Celebrity Bake Off next week?

The GBBO contestants will be tasked with making filled buns, chocolate financier cakes and a chocolate showstopper.

Read more: Who is taking part in the Great Celebrity Bake Off this year

Nadine is seen dropping her buns as she takes them out of the fridge.

During the technical challenge, she then admits: “I have no idea what I’m doing.”

She also gets into a bit of a pickle with her mixer, creating quite the mess of her workspace.

“Look at this place!” she exclaims in the preview.

Who will be a loaf machine in next week’s The Great Stand Up To Cancer Bake Off? Join us next Tuesday as @NadineCoyleNow, @AdeAdepitan, @AnnekaRice and @JohnBishop100 hit the Bake Off Tent! #GBBO pic.twitter.com/Zh889Pdd8a

What did Bake Off fans say about Nadine’s appearance?

However, despite what looks to be a disastrous turn for the singer, her fans are thrilled that she’s making an appearance.

“Nadine Coyle on Bake Off next week. She is my number one celeb crush,” declared one fan.

“Saving the best till last! So ready for more quotable moments from Nadine next week,” said another.

“Nadine looks every bit as chaotic as I expected just from that preview,” another chuckled.

However, one fan did say they had “high hopes” for the star’s baking skills.

Nadine looks every bit as chaotic as I expected just from that preview.

“I have high hopes for Nadine next week,” they commented.

One fan said of the star, who hails from Northern Ireland: “NADINE COYLE ON BAKE OFF NEXT WEEK!!! FLOYUR!!! I REPEAT, FLOYUR!!!”

“Hands up who’s watching #gbbo next week just in the hope that Nadine talks about flour constantly?” another posted.

“I forgot Nadine was doing #GBBO! I hope we hear her say flour,” said another.

However, another Nadine fan pointed to the reasons that the star is perhaps doing the show.

One fan of the girls said sadly: “Seeing Nadine Coyle on SU2C Bake Off next week and just thinking about what Sarah Harding is going through.”

The Great Celebrity Bake Off for Stand Up To Cancer airs on Tuesday (April 6) on Channel 4 at at 8pm.